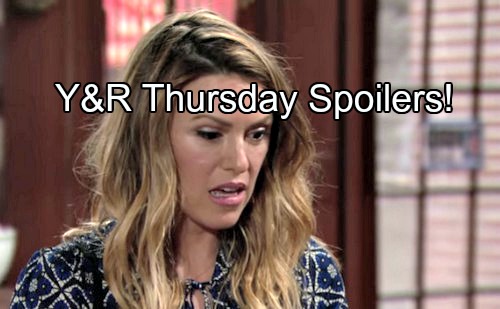 The Young and the Restless spoilers for Thursday’s episode, July 28, tease that Dylan (Steve Burton) and Paul (Doug Davidson) will argue about Adam’s (Justin Hartley) case. At the police station, Paul will insist that Adam accepted a plea deal and they won’t be looking into it any further. Dylan will refuse to stop searching for answers.

Paul will point out that he’s the one in charge, but it won’t convince Dylan to stop investigating. In prison, Michael (Christian LeBlanc) will urge Adam to talk to his wife. He’ll think it would be a mistake to push Chelsea (Melissa Claire Egan) away. Michael went down that road with Lauren (Tracey E. Bregman) and it only made things more difficult.

Later, Y&R spoilers say Michael will instruct Chelsea to pay Adam a visit. When she arrives, Adam will tell Chelsea that 30 years is too long to wait. He’ll want her to let go. Chelsea won’t be on board with that idea. She’ll plan on sticking with Adam through whatever comes his way. Adam will kiss Chelsea and indicate that he’s grateful for her support.

At Crimson Lights, Chelsea will bump into Chloe (Elizabeth Hendrickson) and quiz her about the sippy cup in her purse. Chloe will admit that she has a daughter. Chelsea will guess that Chloe returned because Bella (Cali May Kinder) belongs to Kevin (Greg Rikaart). Before they can sort anything out, Kevin will appear with Natalie (Mara McCaffray).

Kevin will take Chloe aside and scold her for shutting him out. He’ll think that Chloe has been avoiding him. Chloe will stand up for herself and insist that she doesn’t answer to her ex-husband. She’ll have a flashback of making love with Kevin before she left Genoa City. Michael will intervene as their shouting match escalates. Chloe will take her chance to depart.

Meanwhile, Chelsea will let Natalie know that Chloe is Kevin’s ex-wife. Natalie will want the 411 on Chloe, so she’ll turn to Sharon (Sharon Case) and Mariah (Camryn Grimes). Mariah will be shocked when she gets updates on Chloe’s return to town. Sharon will suggest that Chloe was the love of Kevin’s life. Natalie will be nervous about any lingering feelings Kevin might have.

After talking to Esther (Kate Linder), Kevin will find Chloe’s hotel room. She’ll try to shoo him away, but he’ll hear Bella let out a soft cough. Chloe will let Kevin in and tell him that Bella is her daughter. She’ll quickly add that Kevin isn’t the father. Kevin will comment on how much Bella looks like Delia (Sophie Pollono).

Other Young and the Restless spoilers say Stitch (Sean Carrigan) and Abby (Melissa Ordway) will have a fight over the baby shower presents. She’ll be upset that Stitch donated them without asking her permission. Stitch will state that he gave them to the pediatric wing. Abby will retrieve them and head home.

Once alone, Abby will sob as she opens the gifts and reads the cards. She’ll throw the presents around the room. Ashley (Eileen Davidson) will arrive and calm her daughter down. She won’t think it’s wise to push Stitch to have another baby before he’s ready. Ashley will also mention that having the baby gifts around obviously isn’t helping Abby.

Abby will head back to the hospital with the presents. She’ll give Stitch an apology and he’ll state that he’s sorry as well. Stitch will admit that he hopes to have another child someday. He just wants to wait until everything gets sorted out with Max (Jared Breeze). Abby will hug Stitch and they’ll return their donation to the pediatric wing.

It sounds like Stitch and Abby are trying to work through all of the drama. Will they be able to stay on track? Time will tell, but Y&R buzz suggests that more drama could emerge. Stick with the CBS soap to see if bad news is in Stitch and Abby’s future.