‘The Young and the Restless’ Spoilers: Hopeless Adam Devastates Chelsea with Divorce News – Ends Marriage to Set Her Free? 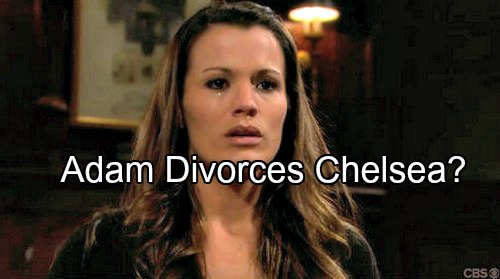 The Young and the Restless (Y&R) spoilers tease that Adam (Justin Hartley) and Chelsea’s (Melissa Claire Egan) marriage could be in trouble. It’s not unusual for soap couples to be driven apart by secrets and infidelity, but things are little different in this situation. Thanks to Victor (Eric Braeden), Adam has been sentenced to 30 years in the state pen for a murder he didn’t commit.

Naturally, that’s caused some tension for Chelsea and Adam. They disagree on whether or not Connor (Gunner and Ryder Gadbois) should visit his father in prison. Anita (Catherine Bach) also thinks Adam’s relationship with Chelsea is pretty much over. With no hope in sight, Anita encouraged Adam to set Chelsea free.

It appears Adam is starting to think that might be a good idea. He’s instructed Michael (Christian LeBlanc) to pass along the news that he can’t have visitors anymore. Adam obviously wants to drive Chelsea away and show her that she has no future with him. He believes this is a selfless act to help Chelsea let go.

In reality, this is going to completely destroy Chelsea. Adam may ask Chelsea for a divorce down the road. If not, Chelsea might decide that she can’t live with a husband that won’t even acknowledge her or their child. Regardless, “Chadam” is headed for more drama.

It’s possible that The Young and the Restless intends on keeping Adam locked up for a while. Justin Hartley will be busy filming the NBC primetime series, This Is Us. Having Adam behind bars for an extended period of time would provide some flexibility. Hartley could shoot fewer Y&R scenes, but he’d still be part of the show.

However, there’s no way Adam is serving 30 years. The Young and the Restless doesn’t have that kind of patience! Chloe (Elizabeth Hendrickson) may blow her cover sooner or later. Victor will continue his efforts to secure Adam’s freedom as well.

When does Victor ever really fail? He’ll bend and break every rule there is if it means getting what he wants. If Nikki (Melody Thomas Scott) gets updates on Victor’s lies, it’ll be more important than ever for Victor to spring Adam from the slammer. Victor’s marriage could be at stake, too.

Once Adam inevitably gets out of prison, what will he come home to? Adam is going to hurt Chelsea deeply by pushing her away. If Adam has divorced Chelsea, she may have moved on with a new love interest by then. Adam may have his work cut out for him when it comes to winning Chelsea back.

Chelsea has forgiven Adam many times before, but everyone has a limit. Will there ever be a moment when Chelsea finally says enough is enough? Maybe, but we wouldn’t bet on it. Chelsea typically can’t steer clear of Adam for very long.

Nevertheless, a divorce would definitely be a huge obstacle for Adam and Chelsea to overcome. They would undoubtedly struggle to rebuild their love. In the meantime, Adam would resent Victor for putting him in prison and tearing his marriage apart. Revenge could be brewing…

We’ll let you know if we hear more about the state of Adam and Chelsea’s relationship. Y&R viewers will be anxious to see where their storyline goes next. Stay tuned and don’t forget to check CDL often for the latest Young and the Restless spoilers, updates and news.