‘The Young and the Restless’ Spoilers: Elizabeth Hendrickson Hints Chloe and Billy Reconnect – Daughter Brings Them Together? 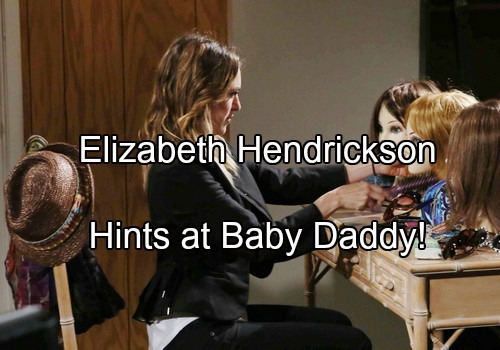 The Young and the Restless (Y&R) spoilers tease that we’ll finally get to the bottom of a huge mystery soon. Chloe (Elizabeth Hendrickson) has a toddler and we still don’t know who she belongs to. Fortunately, this secret is about to explode in a big way.

In an interview with Soap Opera Digest, Elizabeth Hendrickson suggested that she’d like to see Chloe and Billy (Jason Thompson) reconnect. If Chloe has another daughter with Billy, then it would be easy to put these two back together. They’d have plenty of issues to delve into.

Billy is currently involved with Phyllis (Gina Tognoni), but it’s clear that he has some lingering feelings for Victoria (Amelia Heinle). If neither relationship pans out, Billy will need a different love interest. We all know Billy tends to rebound quickly!

Let’s say Jill’s (Jess Walton) current plan pays off and Billy starts growing closer to Victoria. Then, Billy’s affair with Phyllis could blow up and put the brakes on the Victoria reunion. Chloe could drop the baby bomb and make Billy’s life even more chaotic. He could bond with Chloe as he gets to know his daughter.

It might be interesting to explore “Chilly” again now that Jason Thompson is in the role. Sometimes it’s fun to see a new spin on an old pairing. However, we can’t get too far ahead of ourselves here. There’s no guarantee that Billy will be the “baby daddy.”

Related: Who is Chloe’s Baby Daddy – Kevin or Billy? VOTE!

It actually makes more sense for this child to be Kevin’s (Greg Rikaart). Billy already has little ones to take care of. Although this is shocking any way you slice it, Kevin’s life might be the most affected by the news that he’s a father.

Plus, it would give Kevin some solid material. He could do something besides kissing Natalie (Mara McCaffray) and computer hacking. Kevin could definitely use a more dramatic Y&R storyline. He hasn’t had one in a while.

The Young and the Restless may avoid reuniting Chloe and Kevin romantically. They were kind of lackluster as a couple. Friendship would be a better option. Chloe could easily co-parent with Kevin and pursue a relationship with Billy.

Who knows? Chloe might even lie about the paternity at first. She desperately wanted another child with Billy to replace Delia (Sophie Pollono). Since that’s what Chloe was hoping for, that’s probably not how things turned out.

Wishes rarely get granted on The Young and the Restless. That’s just not how life usually works in Genoa City. Nevertheless, it’s a guessing game at this point. Only Chloe knows the truth. Well, maybe Victor (Eric Braeden) is also in the loop on the paternity. He seems to be all-knowing when it comes to dirty details like this.

We’ll give you updates on the impending revelation. It sounds like some fantastic drama is brewing. You can’t beat a secret saga. Chloe is sure to create some major excitement. Stay tuned to Y&R and don’t forget to check CDL often for the latest Young and the Restless spoilers, updates and news.