The Young and the Restless Spoilers: Victor Newman Goes After Chloe’s Custody of Bella 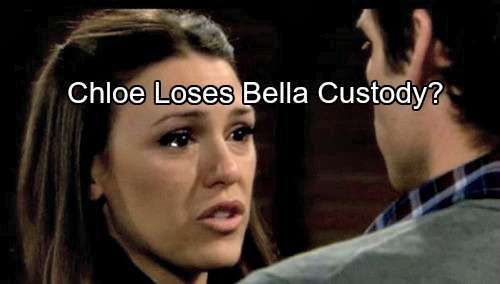 The Young and the Restless (Y&R) spoilers tell us that Chloe (Elizabeth Hendrickson) clearly isn’t thinking straight. She’s provoking Victor Newman (Eric Braeden), who could easily take her daughter Bella (Cali May Kinder). All of Chloe’s actions continue to stem from a belief that Adam (Justin Hartley) escaped justice for accidentally killing Delia (Sophie Pollono) on ‘The Young and the Restless’.

It probably isn’t be fair to note that the evidence that convicted Adam seemed suspect at the time. The justice system decided that he was guilty and initially sentenced him to prison. Maneuvering on Victor’s behalf, combined with blackmail against appeal hearing Judge Elise Moxley (Jensen Buchanan), served to reduce Adam’s legal consequence to probation and community service.

Surely most people who tragically lost a child and subsequently saw the convicted killer, even if accidental, go free would become tortured souls as well.

But, longtime viewers know that Chloe lived recklessly for years on ‘The Young and The Restless’. She initially set her sights on Billy (then played by Billy Miller) when both characters were living in New York and later gave birth to his child.

And, despite Billy’s flaws, she didn’t create a stable life for Delia after she was born. Now, The Young and the Restless spoilers show that Chloe’s current behavior puts Bella’s future at risk and there’s no doubt that Victor counterpunches to the gut when he deems necessary.

Chloe’s unwillingness to turn over the real pages of Sage’s (Kelly Sullivan) journal altered Victor’s plans. He recruited Chloe to help him frame Adam for murder, but didn’t actually want his son to go behind bars. Yes, The Moustache has never been Father of the Year material. Regardless, Chloe’s current actions represent the real problem right now.

Victor’s desire to control all situations means that he’ll likely force Chloe’s hand on ‘The Young and The Restless’ in the near future. Of course, Chloe might trip over her own ego before that happens. In either scenario, few people have ever put one over the ‘Great Man’ and even those who partially have paid some type of price.

CDL is a leading source for everything linked to ‘The Young and The Restless’. Check back regularly for Y&R spoilers and news!