BY Heather Hughes on May 10, 2016 | Comments: 8 comments
Related : Soap Opera, Spoiler, Television, The Young and the Restless 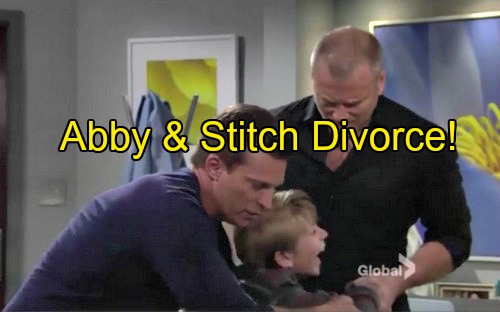 “The Young and the Restless” (Y&R) spoilers tease that Abby’s (Melissa Ordway) world will continue to crumble on this week’s episodes. Abby has faced obstacle after obstacle lately. She was stunned when she suddenly became a stepmom. It was especially tough since Max’s (Jared Breeze) biological mother was on the phone with Abby during the car crash that took her life.

Of course, Abby had to cope with Max’s outbursts and stunts as well. Max’s last stunt went too far and resulted in the death of Abby’s baby. Stitch (Sean Carrigan) and Abby were completely devastated. As if that wasn’t difficult enough for this couple, now they’re left to contend with the consequences of Max’s involvement.

Abby is worried that Stitch may try to blame her for this, but he really has no reason to. Max certainly didn’t make it easy, but Abby truly tried to connect with him. He just wasn’t willing to let her. Max’s issues were a hindrance to developing any type of bond.

However, some “Young and the Restless” fans are arguing that Stitch bears at least a little responsibility in all of this. Stitch is a doctor and he should’ve known something was up with Max. Instead of recognizing the problem and handling it immediately, Stitch chose to ignore the warning signs. He just couldn’t take the blinders off.

When Max’s mother died, he was sent to live with a father he barely knew and a stepmother he didn’t know at all. Max was uprooted and struggling with grief. Some counseling would’ve undoubtedly been beneficial. If Max had received the guidance he needed from the get-go, we might be watching a very different situation unfold right now.

If Stitch tries to throw blame on Abby, she could easily throw it right back in his face. Nevertheless, Abby will likely be sympathetic to the fact that Stitch is hurting. She’s still distraught over her miscarriage, so this just makes everything even worse.

Abby has already faced so much loss and now she could lose Stitch, too.

Stitch may push Abby away as he tries to deal with the fallout of Max’s actions. It may become more painful for both of them as time goes on. Abby and Stitch have created some horrible memories over the past few weeks. The complications could haunt them for years if they don’t figure something out.

Will Stitch and Abby decide that a divorce is the only real solution? Many Y&R viewers wouldn’t be surprised by that news. This marriage felt doomed from the start. Stick with the CBS soap for updates on this sinking ship.