BY Heather Hughes on May 30, 2016 | Comments: 3 comments
Related : Soap Opera, Spoiler, Television, The Young and the Restless 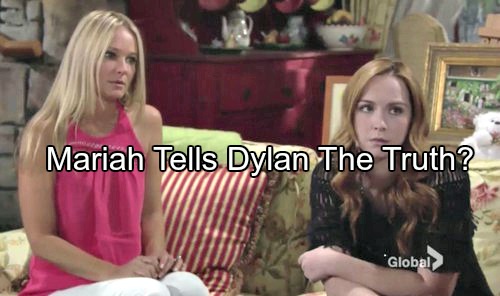 “The Young and the Restless” (Y&R) spoilers reveal that on this week’s episodes Nick’s (Joshua Morrow) chat with Sharon (Sharon Case) will leave her in a panic. Sharon is starting to worry that Nick is catching on. His comments make it sounds like he already knows Sully is actually his son, Christian.

Of course, Sharon is likely just excessively paranoid. If Nick really knew the truth, he would have outed Sharon for her lies by now. Instead, it seems Nick will have Adam (Justin Hartley) on his mind. Nick doesn’t particularly like Adam, but he feels like he should help him if he’s been wrongfully accused.

“The Young and the Restless” spoilers say Nick will wonder if it’s a sin to keep a secret when it could cause someone else to suffer. We know Nick could ask for Constance’s (Sally Kellerman) body to be exhumed again, but there might be something else he could do. Maybe Nick is holding out when it comes to evidence that could prove Adam’s innocence.

Then again, perhaps Nick mainly feels bad about coming forward with the journal in the first place. Victor (Eric Braeden) may have been behind the setup, but that didn’t mean Nick had to take the bait. Now Adam is in a world of trouble and Nick share some blame for jumping to conclusions.

Sharon probably won’t hear a word Nick says after “secret.” She’s clearly on high alert. If Sharon can’t dial down the jumpiness, Nick is going to figure out that something’s up. Fortunately, Nick is pretty oblivious to what’s going on around him on any given day. It takes a lot to make Nick notice anything, so Sharon may keep everything under wraps for now.

Meanwhile, Dylan (Steve Burton) will mull over Sharon’s strange behavior. He tries to be in tune with her bipolar symptoms so he can catch her whenever she goes off her meds. Dylan doesn’t realize that Sharon is under an enormous amount of stress right now. Nevertheless, he’ll approach Mariah (Camryn Grimes) in hopes of getting to the bottom of Sharon’s current issues.

Y&R spoilers say Dylan will indicate that he trusts Mariah to tell him what’s bothering Sharon. He’ll want to know if Mariah can offer any hints about what Sharon is going through. Mariah will be unnerved by the questions. She’s in quite a bind. Mariah hates keeping Dylan and Nick out of the loop, but she doesn’t want to betray Sharon.

Mariah’s loyalty to Sharon may win out for the time being, but the pressure is mounting. At some point, Mariah may not be able to take this deception anymore. There’s a good chance she’ll give someone else this news before all of the daddy drama comes into play.

Will Mariah end up blurting it out to Kevin (Greg Rikaart) or another Genoa City resident? We’ll have to wait and see, but it should be interesting to see where this road takes us. Faith (Alyvia Alyn Lind) was also spotted eavesdropping, so she could be involved in this in some capacity. Stick with the CBS soap for updates on the twists and turns of this storyline.