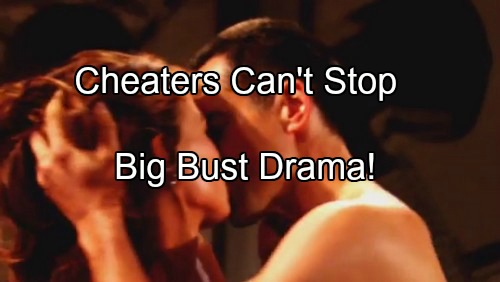 The Young and the Restless (Y&R) spoilers tease that Phyllis (Gina Tognoni) will feel like she’s backed into a corner. Now that Jill (Jess Walton) knows about Phyllis’ affair with Billy (Jason Thompson) affair, she intends on making sure it ends for good. Otherwise, Jill will tell Jack (Peter Bergman) who Phyllis has been sneaking around with.

Phyllis was planning on leaving Jack and pursuing a future with Billy. However, she didn’t want to deliver two blows at once. The idea of telling Jack the whole truth is just too daunting. Phyllis would rather suck it up and try to make her marriage work.

Of course, we all know that plan is going to fail miserably. Billy and Phyllis have really fallen head over heels. They usually can’t be in a room together without ripping each other’s clothes off. How long can they avoid temptation? Not long at all…

The Young and the Restless spoilers say Phyllis will find herself yearning for Billy within a couple of days. She’ll find Billy simply irresistible and that could lead to big trouble. It certainly sounds like Phyllis is about to cave in and continue her torrid affair.

That should put Phyllis and Billy right back where they started, but the stakes have obviously been raised. First of all, Jill is aware of what’s been going on. She’ll be watching these two like a hawk. One wrong move and everything will explode.

To make matters worse, Phyllis will have to keep up the charade of working things out with Jack. That should lead to more guilt and stress. Phyllis should definitely feel terrible for cheating, but she’s just begging for a breakdown if she piles on any additional shame.

When Phyllis feels guilty, she tends to be on edge. It may create suspicion for Jack, Jill or anyone else who might become privy to this scandal. Phyllis could feel like the walls are closing in. Nevertheless, that may not be enough to stop Phyllis from sleeping with Billy every chance she gets.

The Young and the Restless buzz suggests that Phyllis and Billy’s affair may be exposed on September 1. Mal Young, the executive producer of Y&R, hinted at it by retweeting a fan’s speculation. Since that date will feature the 11,000th episode of the CBS soap, they’ll want to deliver something shocking to please viewers.

If Jack discovers the secret that day, how will the revelation come about? Will he walk in on Billy and Phyllis in bed together? Will Jill realize the lovebirds are still at it and spill the beans herself? Any option should be entertaining. We’re all just anxious to see the juicy fallout of this Young and the Restless storyline.

Let’s hope they knock our socks off! Y&R typically pulls off epic reveals, so fans expect a lot from this one. We’ll give you updates as other news becomes available. Stay tuned and don’t forget to check CDL often for the latest Young and the Restless spoilers, updates and news.