BY Heather Hughes on May 10, 2016 | Comments: 4 comments
Related : Soap Opera, Spoiler, Television, The Young and the Restless 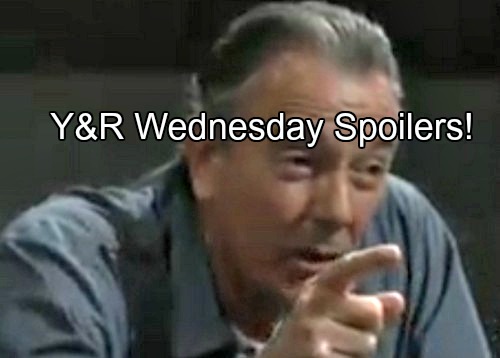 “The Young and the Restless” (Y&R) spoilers for tomorrow’s episode, Wednesday, May 11, tease that Adam (Justin Hartley) will confront Victor (Eric Braeden) about the plan he’s cooking up. Adam will pay Victor a visit in prison and mention the issue of Dr. Gates (Alicia Coppola).

He’ll bring up that Dr. Gates’ father is the head of the judicial review board. Adam will hint that Victor is trying to manipulate his way out of the state pen.

Talk will turn to Adam running the show at Newman Enterprises. Victor will think Adam should ditch his job at Chelsea’s (Melissa Claire Egan) company and take the throne where he belongs. Adam won’t be interested, but Victor will point out that Nick (Joshua Morrow) and Victoria (Amelia Heinle) aren’t capable of being in charge right now.

Meanwhile, The Young and the Restless spoilers tease that Mariah (Camryn Grimes) will try to have a serious conversation with Kevin (Greg Rikaart) about Nick. She’ll open up about her concerns, but Natalie (Mara McCaffray) will interrupt by rambling about her upcoming safari.

Mariah will head off to Sharon’s (Sharon Case) place and she’ll walk in on an interesting discussion.

After sharing a warm moment with Nick, Mariah will realize that Sharon is pushing him to spend time with Sully. Nick won’t understand why that would help him. He’s finding it difficult to even hang out with Faith (Alyvia Alyn Lind) at the moment.

Sharon will keep at it, but Nick will insist that just taking Faith off his hands for a while will help.

After Nick leaves, Mariah will grill Sharon about what she’s up to. Sharon will claim that she just wants to give Nick some comfort. Elsewhere, Jack (Peter Bergman) will tell Phyllis (Gina Tognoni) that his credit card has been hacked. They’ll fear that this could be a disaster for Passkey.

Phyllis will announce that she’s going to talk to Natalie. She’ll want to get the glitch fixed before the press has a field day. At the park, Natalie will snub her nose at doing anything computer-related. Y&R spoilers say she’ll say she’s out of the biz.

Later, Kevin will wonder if Natalie is sure she wants to turn her back on the project. Natalie has a lot riding on it. Her reputation is at stake. Natalie won’t be worried about it. She’ll be more concerned with kissing Kevin. When Mariah spots their smooch, she’ll decide she’s had enough.

Mariah will let Kevin know that she plans on moving out.

Other “Young and the Restless” spoilers say Jack will try to get Fiona back on board at Jabot. Fiona will suggest that things should be imploding soon and she doesn’t want to be involved. Jack will question Fiona about what she means.

Fiona will think there’s something going on between Billy (Jason Thompson) and Phyllis. She’ll believe Jack should take it seriously.

At Newman, Nick will try to stop another shouting match between Billy and Victoria. He’ll want them to admit they’re right for each other, but Billy will just storm out. Nick will talk to Victoria about his grief and his need to keep busy. He’ll think Victoria is using work to cope with her problems as well.

Adam will arrive with updates on his meeting with Victor. He’ll hint that Victor has a comeback in mind. Vic definitely has a few tricks up his sleeve. At the park, Phyllis will ask Billy to speak with Natalie. Billy won’t be sure he wants to help Jack after everything that’s happened. Phyllis will grab Billy’s hand and beg for his help.

Jack will emerge in the distance and take note of their hand-holding. It looks like Fiona was right. There’s definitely something going on between Billy and Phyllis. That could mean bad news for Phyllis and Jack’s marriage.

Y&R viewers can expect Phyllis and Billy to make love by the end of the week. Stick with the CBS soap to see how it all unfolds.