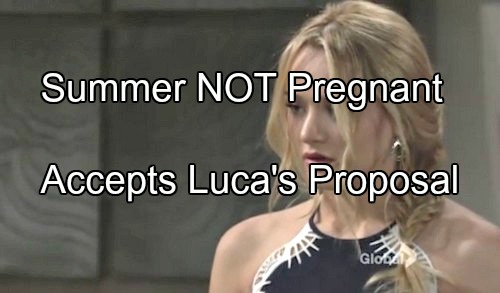 The Young and the Restless (Y&R) spoilers for Thursday, August 4, tease that Cane (Daniel Goddard) and Billy (Jason Thompson) will find themselves at odds over Brash and Sassy. They’ll argue about their different visions for the company. Jill (Jess Walton) wanted Billy and Cane to get along, but so far that plan isn’t really working out.

Cane will schedule a meeting with Jill in hopes of finding a solution. Meanwhile, Phyllis (Gina Tognoni) will be horrified to learn that Summer (Hunter King) might be pregnant. Nick (Joshua Morrow) will give Phyllis updates on the chat he overheard. They’ll agree that Luca (Miles Gaston Villanueva) is bad news and needs to be handled.

Elsewhere, Summer will take a pregnancy test and await the results. She’ll reflect on her relationship with Luca and wonder what the future holds. Phyllis will burst in and start ranting. Summer will finally stop the tirade by informing her mom that she’s not pregnant. She’ll urge Phyllis to back off and butt out.

At Crimson Lights, Nick will snatch Luca’s shirt and warn him that he’d better do the right thing. Luca will assure Nick that he’s not going anywhere. He’ll want to support Summer and raise their child if one’s on the way. Phyllis will arrive and announce that the test was negative.

A relieved Nick will state that he still believes Luca is to blame for the oil crisis. He’ll make plans for a trip to Newfoundland to get to the bottom of it. At home, Luca will show up with flowers and candy for Summer. He’ll pull out a small jewelry box and drop to one knee.

Summer will point out that she’s not pregnant. She won’t think Luca shouldn’t feel obligated to propose. Luca will maintain that he sees a future with Summer. He’ll open the box to reveal a ring. After Luca pops the question in Spanish, Summer will accept his proposal and they’ll make love.

Other Young and the Restless spoilers indicate that the media will begin reporting on the drug trial lawsuit. Lily (Christel Khalil) will get fed up with the way Devon (Bryton James) always pays the price for Hilary’s (Mishael Morgan) mistakes. She’ll intend on doing something about it before Hilary causes any more problems.

Ashley (Eileen Davidson) won’t be too pleased with Hilary either. She’ll find Hilary using Dr. Neville (Michael E. Knight) as the scapegoat during an impromptu press conference. After rushing to Dr. Neville’s defense, Ashley will scold Hilary privately. She’ll mention that Hilary bribed the lab tech and set all of this in motion.

Devon will call a lawyer in an effort to damage control. He’ll fear that Hilary’s comments won’t come across well in the media. Hilary will insist that Devon needs to start backing her up. Later, Y&R spoilers say Jack (Peter Bergman) will tell Lily that the lawsuit is hurting the foundation. Donations have taken a hit.

Lily will declare that it’s time to cut Hilary loose. When Ashley walks in, she’ll wholeheartedly agree. Billy, Hilary and Devon will all enter for the board meeting. Ashley will suggest they have important business to take care of.

The meeting will get derailed once Phyllis arrives. She’ll be shocked to discover that Billy is now on the board. It seems Billy is determined be close to Phyllis. Will they be able to avoid temptation? Stick with the CBS soap to see if this forbidden romance is truly over.