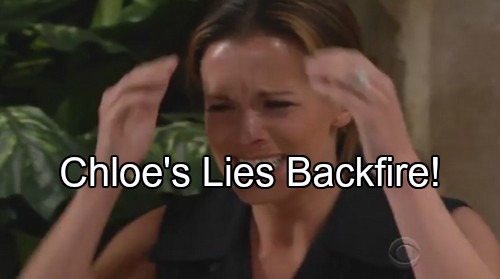 However, Chloe recently accepted Chelsea’s (Melissa Claire Egan) offer to live in the penthouse, which established a dangerous set of potential scenarios. Will this seemingly generous welcome that Chloe and Bella (Cali May Kinder) received eventually result in Sage’s withheld diary pages being voluntarily relinquished?

Don’t forget that Chloe is hiding Bella’s paternity and that makes her vulnerable. Will this baby-daddy secret eventually be the back door by which Adam Newman get’s his freedom?

This storyline is engaging because it has the ability to flow in numerous directions. The best outcome for Adam would have Chloe give the diary pages to the police, thereby likely leading to his quick release from Walworth State Prison. Chloe wouldn’t necessarily have to reveal herself in that particular instance.

Other positive scenarios for Adam would see Chloe admit what she’d done to Chelsea and give her the pages directly. Chelsea could also find, or somehow locate, the pages on her own. Though, the latter projection would surely damage chances that these women could ever be friends again.

Chloe’s past attempt to kill Adam with a vehicle failed. Considering that she openly lied to Chelsea this week about having accepted Delia’s (Sophie Pollono) death as an accident and that she realized trying to kill Adam as a form of retribution was wrong, it’s obvious that unresolved hostilities still burn inside Chloe’s tortured mind.

This is exactly why Adam asked his wife to gain Chloe’s trust and learn why she returned to Genoa City.

Readers of The Young and the Restless spoilers know that Chloe could easily explode if she realizes that Chelsea is actually spying on her. Adam’s nearly convinced that Chloe is the mystery woman who Victor was shown meeting with on the prison video Kevin (Greg Rikaart) hacked.

Hopefully, all characters involved aren’t further hurt by whatever consequences result from the volatile games Chloe and Chelsea are now playing with each other.