The Young and the Restless Spoilers: Nikki Bans Sharon from Newman Thanksgiving – Fire at Abbott Cabin 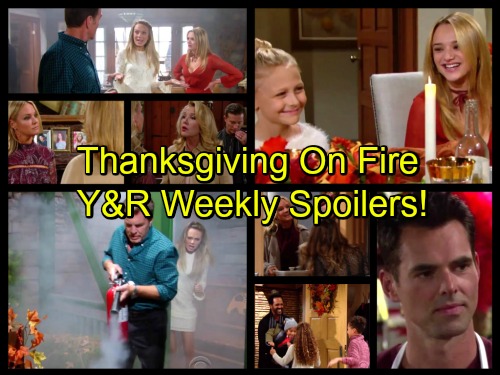 The Young and the Restless (Y&R) spoilers for the week of November 21 – 25 tease that there’ll be several celebrations in Genoa City. As Thanksgiving approaches, this should be a time for many characters to count their blessings. Unfortunately, Dylan (Steve Burton) and Sharon (Sharon Case) aren’t feeling very grateful. They can’t help but think of Sully and the dream they just lost.

To make matters worse, Nikki (Melody Thomas Scott) will continue to cause issues. She’s appalled at the way Sharon treated her sons. Nikki holds Sharon responsible for the pain Dylan is feeling and for the months Nick missed out on with Christian. As a result, Nikki will ban Sharon from the Newmans’ Thanksgiving gathering.

Y&R’s weekly promo shows Nikki declaring, “You are not invited to my home.” Dylan will look frustrated by the situation. Sharon and Dylan recently had a fight, but they’ll probably patch things up before Nikki comes around. Dylan is still angry with Sharon, but he won’t like Nikki’s attitude. He’ll choose to skip the Newman feast and celebrate elsewhere with Sharon.

Meanwhile, the Abbott family will prepare for a fantastic turkey day at the cabin. They’ll cook up a great meal and hope that they can keep the peace on this holiday. It won’t be easy once Jack (Peter Bergman) and Billy (Jason Thompson) join the party. It’s no secret that these two are at odds. Billy’s betrayal is proving tough to get past.

Nevertheless, Billy will attempt to get along with his brother. He’ll want to watch some football and try to enjoy each other’s company. Of course, Jack will struggle to do that. He’ll keep imagining Phyllis (Gina Tognoni) and Billy’s love sessions. The affair will make it difficult for Jack and Billy to repair their bond.

In the kitchen, Thanksgiving will take a fiery turn. The Young and the Restless spoilers say Jack will step in after a blaze is sparked. He’ll grab the fire extinguisher as smoke fills the air. The whole dinner will be ruined, but Abby (Melissa Ordway) will choose to look on the bright side. They’ll manage to salvage dessert. The promo shows Abby saying, “There is good news…we saved the pies!”

While the Abbotts pass around slabs of pumpkin, Neil (Kristoff St. John) will meet up with his own family. The Young and the Restless spoilers state that Neil’s son, Moses (Dax Randall), will drop in for the party. Neil will happily spend time with the rest of his brood as well. He’ll wish his mom had made it through the holidays, but having other loved ones around should ease the pain.

It sounds like some fun episodes are coming up on the CBS soap. Y&R will certainly deliver the warm fuzzies, but it’s just not Thanksgiving without a little family drama. There’ll be some surprises along the way. We’ll give you updates as more details emerge. Stay tuned and don’t forget to check CDL often for the latest Young and the Restless spoilers, updates and news. You can join in the Y&R discussion live on our Facebook Page!