BY Heather Hughes on July 24, 2016 | Comments: one comment
Related : Soap Opera, Spoiler, Television, The Young and the Restless 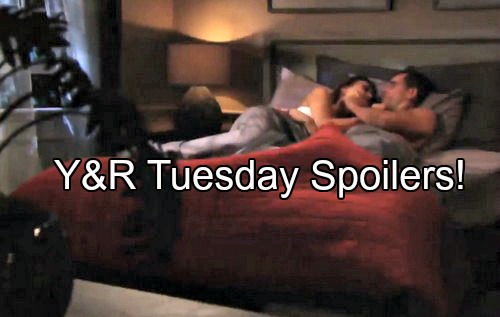 The Young and the Restless (Y&R) spoilers for Tuesday, July 26, tease that Chloe (Elizabeth Hendrickson) will make her next shocking visit. She already showed up at Victor’s (Eric Braeden) place shortly after his release. Once they conclude their chat, Chloe will head over to Chelsea’s (Melissa Claire Egan) penthouse.

What does Chloe hope to achieve? Does she want to offer her sympathy to divert suspicion? Chloe might pretend that she feels terrible about the drama Chelsea is facing. She might get a sense of satisfaction by playing the role of a supportive friend when she’s partly responsible for Adam’s (Justin Hartley) incarceration.

Chelsea will have questions once Chloe appears without warning. It could lead her to do a bit of digging and that probably wouldn’t end well for Chloe. There are plenty of secrets left to be uncovered.

Speaking of secrets, Jill (Jess Walton) is about to become privy to a juicy one. The Young and the Restless spoilers indicate that Jill will find out who Billy (Jason Thompson) has been taking to bed. Actually, she’ll catch them in it! We’ve all been waiting for someone to get a clue and it’s finally happening.

Phyllis (Gina Tognoni) and Billy will cuddle after making love, but they’ll neglect to lock (or even completely shut) the door. D’oh! When are these people ever going to learn? Jill will waltz by and see them canoodling. You can bet Jill will have a thing or two to say about this!

Nevertheless, it seems Jill will decide to hold her tongue and save her rant for later. Jill will probably just be so stunned that she can’t even process the news. The fact that they’re naked might dissuade Jill, too. That certainly would have been an awkward encounter.

There’s also Jill’s rage to consider. Jill might feel the need to cool off before confronting Phyllis and Billy. Who knows what she would’ve done she’d approached them in the heat of the moment? We don’t need another Young and the Restless character in prison!

Elsewhere, Victor will wonder what Phyllis has in store. We all know how Phyllis rolls. She never misses a chance to seek vengeance, especially when Victor is involved. When Victor points that out to Jack (Peter Bergman), he’ll be met with skepticism.

Victor will chuckle at Jack’s naiveté. Y&R’s preview video shows Victor saying, “If you think that she is not contemplating revenge, then you don’t know your wife.” Jack will look a tad nervous at the thought of Phyllis stirring up more trouble.

Phyllis and Jack’s problems started with Marco (Peter Bergman), but they definitely continued in the months that followed. Once Phyllis became obsessed with retribution, Jack felt like she was out of control. Phyllis has come to realize that they’re not on the same page.

Of course, Phyllis is pretty tied up in her affair right now. It doesn’t leave much time for revenge. Perhaps Phyllis will wait until a window of opportunity presents itself. It’s best to strike when Victor least expects it.

We’ll give you updates on any plots that emerge. Stay tuned to Y&R and don’t forget to check CDL often for the latest Young and the Restless spoilers, updates and news.