BY Heather Hughes on April 12, 2016 | Comments: one comment
Related : Soap Opera, Spoiler, Television, The Young and the Restless 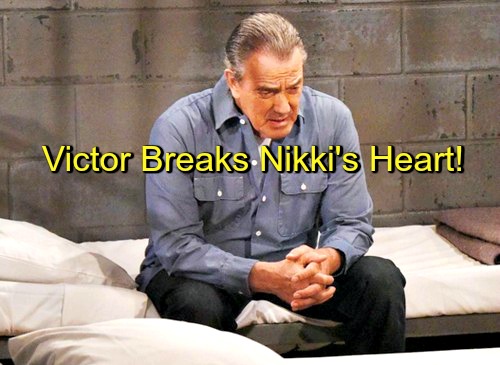 “The Young and the Restless” spoilers for tomorrow’s episode, Wednesday, April 13, tease that Nikki (Melody Thomas Scott) will continue guzzling alcohol to numb her pain. Jack (Peter Bergman) will find Nikki sleeping it off and she’ll say she remembered it was her anniversary.

Nikki will suggest that she’s been dreaming of better days with Victor (Eric Braeden).

When Nikki says she wants to see Victor, Jack won’t be on board with the idea. Victor is always a trigger for Nikki and she needs to focus on getting sober again. Nikki won’t give up. Y&R spoilers say she’ll keep pestering until Jack caves. He’ll agree to call the warden about setting up a meeting, but he’ll offer a warning.

Nikki needs to be careful what she wishes for when it comes to Victor.

Meanwhile, The Young and the Restless spoilers Victor will be intrigued when he meets Dr. Meredith Gates (Alicia Coppola). After Victor awakens from a dream about Nikki, he’ll learn his stab wound was stitched up in the infirmary.

Dr. Gates will ask who Vic was dreaming about. Victor won’t give too many details, but the doc will mention that he said his wife’s name.

Dr. Gates will indicate that she heard about Victor’s family turning against him at trial. It may be tough, but she’ll hint that forgiveness is possible. Unfortunately, Victor won’t take the advice. When Nikki shows up for the meeting Jack scheduled, Victor will refuse to see her. Poor Nikki! She’ll be devastated by the news.

Other “Young and the Restless” spoilers reveal that Max (Jared Breeze) will dare Charlie (Aidan Clark) to pull the fire alarm at Crimson Lights. It looks like Max’s mischievous tendencies are rubbing off. Once Charlie goes through with the dare, Lily (Christel Khalil) will make sure he gets punished.

Abby (Melissa Ordway) will try her best to discipline Max, but it won’t do much good. Max won’t seem to care about being in trouble. Later, he’ll be scolded by Stitch (Sean Carrigan) for the incident. Max will gripe about Abby, but Stitch will think she deserves a chance.

Dr. Neville (Michael E. Knight) and Ashley (Eileen Davidson) will figure out that Abby set them up with the flowers. They’ll agree that they’re just friends and colleagues, but it appears they may be hiding their true feelings. Something may be brewing here.

Dr. Neville will track down Stitch and berate him for not making Abby feel secure. She needs to know that Stitch won’t run to Ashley over every little thing. Stitch will be offended and they’ll argue. He’ll think Dr. Neville is a big wuss.

Dr. Neville will return to the lab. He’ll eavesdrop on Ashley and Abby’s conversation. Ashley will maintain that Abby shouldn’t have schemed with the flowers. She’ll say there’s nothing going on with Dr. Neville.

We’ll also see more drama from Hilary (Mishael Morgan) in Wednesday’s episode of Y&R. When Devon (Bryton James) forces his wife to give Ashley her office and title back, Hilary will throw a fit. She’ll end up finding Jack and fibbing that she offered to give Ashley back what was rightfully hers. Due to this faux sacrifice, Hilary will want a seat on the board.

Jack will show some resistance, but it won’t take Hilary long to break him down. He’ll agree and welcome Hilary to the foundation. Hilary is determined to get what she wants, but will that grit come with some costs? Y&R buzz hints that Devon and Hilary’s marriage could be in jeopardy if something doesn’t change. Stick with the CBS soap for updates on the bumpy road ahead.