‘The Young and the Restless’ Spoilers: Victor Threatens Chloe, Struggles to Keep Partner in Line – Sharon Has Meltdown 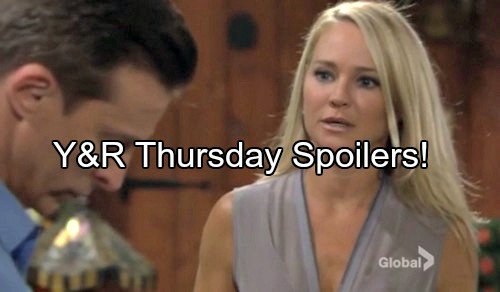 The Young and the Restless (Y&R) spoilers for Thursday, July 14, tease that Adam (Justin Hartley) and Chelsea (Melissa Claire Egan) will indulge in some Champagne and lovemaking. Chelsea will be certain that Dylan’s (Steve Burton) tip will lead him to the real journal entries. Unfortunately, they’re jumping the gun on this celebration.

Dylan will only find an empty envelope in the locker he was instructed to check out. Sharon (Sharon Case) will freak when she realizes Dylan is going to meet with Kevin (Greg Rikaart). She won’t trust that Kevin will keep his mouth shut about her visions of Sage (Kelly Sullivan).

Mariah (Camryn Grimes) will offer reassurance, but she’ll obviously have some doubts as well. At Crimson Lights, Mariah will remind Kevin of his promise and he’ll maintain that he’s just working on a case with Dylan. Speaking of that case, Dylan will ask Kevin to trace the tip. Kev will learn the call came in from a burner phone.

Once Dylan comes home, Sharon will begin grilling him. She’ll insist that Dylan should forget whatever Kevin said. Sharon will hint that Kevin can’t be trusted. Dylan will think Sharon’s outburst seems strange. He may suspect that his wife is hiding something.

Sharon will panic again when Faith (Alyvia Alyn Lind) tells Dylan that she sees Sage daily like her mommy. Luckily, Faith will just be talking about a photograph. Meanwhile, Natalie (Mara McCaffray) will study the security footage. She’ll discover that Victor’s (Eric Braeden) accomplice has been wearing a wig.

The Young and the Restless spoilers reveal that we’ll finally find out who Victor’s secret accomplice is. Of course, most of us figured it out already. Chloe (Elizabeth Hendrickson) is Victor’s partner in crime. She’ll indicate that she’s not pleased with Victor’s decision to proclaim Adam’s innocence in court.

Chloe will wonder why Victor went to all of this trouble if he was just going to clear Adam’s name. She’ll demand justice for Delia (Sophie Pollono), but Victor will urge her to leave Genoa City immediately. If the cops learn Chloe was involved in the setup, she’ll be in hot water. Chloe will be confident that she can cover her tracks.

Michael (Christian LeBlanc) will show up to question Victor about the missing diary pages. He’ll say Adam filled him in on the deal. Victor will suggest that he doesn’t know anything about it. Chloe will turn her face away while Michael is around. Her scrubs will provide the perfect cover.

Michael will head to the penthouse to discuss the bad news with Adam. Dylan’s tip left him emptyhanded and now Victor is playing dumb. Michael will wonder if it might be time to start talking about a plea bargain.

Back in Victor’s room, he’ll want some answers from Chloe. He’ll ask what Chloe did with the journal entries. She’ll suggest that she put them somewhere for safekeeping. Victor will mention Chloe’s daughter, Bella (Cali May Kinder). He made sure Bella was taken care of while Chloe was in the psychiatric hospital.

If Chloe doesn’t play by Victor’s rules, she could lose her little girl. Y&R spoilers say Victor will urge Chloe to choose wisely. Revenge for Delia’s death could cost her a future with Bella. Chloe will state that she could burn the real journal entries and wipe out any evidence of her connection to Victor.

Vic won’t be happy that Chloe is fighting back. He’ll imply that Chloe is playing with fire. Will Chloe gain the upper hand or will Victor find a way to keep her in line? Stick with the CBS soap for updates on what’s in store.