‘The Young and the Restless’ Spoilers: Will Phyllis Choose Jack or Billy?

BY Heather Hughes on July 19, 2016 | Comments: one comment
Related : Soap Opera, Spoiler, Television, The Young and the Restless 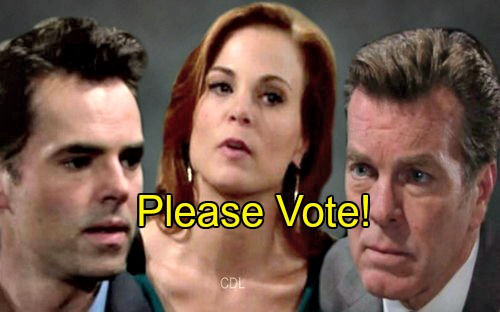 The Young and the Restless (Y&R) spoilers tease that Billy (Jason Thompson) will once again pressure Phyllis (Gina Tognoni) to make a decision. He’s tried to convince Phyllis that they deserve a chance to be together. Billy knows they could have something amazing if Phyllis would just give in.

Of course, it’s not that easy for Phyllis. She cares about Jack (Peter Bergman) and she realizes this would be a crushing blow. Nevertheless, Billy will wonder if Phyllis has finally made her choice. He’ll ask who it’s going to be.

Let’s look at Phyllis’ options and determine the possible outcomes. If Phyllis stays with Jack, then she may spend all of her time pining for Billy. Besides, it’s doubtful that they would truly be able to end their fling. Billy and Phyllis obviously can’t resist each other.

Choosing Billy would cause tremendous sorrow for Jack, but at least he’d know the truth about Phyllis’ feelings. Even if Phyllis decides she wants to work things out with her husband, she’d still be better off coming clean. Part of Phyllis’ problem right now is her overwhelming guilt.

If Phyllis expects to move forward with Jack, a confession should be made. That presents some issues, too. Jack may never get over the pain of being betrayed by his wife and brother. Phyllis may choose Jack and then lose him anyway.

As for Billy, he’s caught up in this whirlwind romance. Does Billy love Phyllis or just the idea of being in love again? It’s tough to say. Their affair happened soon after Billy’s breakup with Victoria (Amelia Heinle).

Billy may have truly fallen for Phyllis or this might be a rebound. If we don’t know, then neither does Phyllis. She has no guarantee that Billy will remain committed to her if she decides he’s the man she wants to be with.

There’s a third option we have to consider as well. Phyllis could determine that she simply can’t choose between these brothers. She could decide that they both have too many pros and cons. That would leave Phyllis lonely and heartbroken.

Still, that might be the best option if Phyllis can’t wrap her head around all of this. Maybe Phyllis should try to find love outside of the Abbott family. There’s really no outcome that leaves Phyllis happy initially. She may find peace later on, but Y&R viewers can expect plenty of drama in the meantime.

To complicate matters even further, The Young and the Restless spoilers say Jack will find out that Phyllis lied about her business trip. She didn’t take the company jet to the Passkey conference. Jack will begin to wonder if Phyllis is having an affair.

Jack will plan on staying silent for now, but he could change his mind down the road. Could this knowledge alter how Jack responds to the affair news? It may make Phyllis’ lies cut deeper. The Young and the Restless fans will be anxious to see how this plays out.

We’ll give you updates as we get closer to the big reveal. You won’t want to miss the heated confrontations ahead. Stay tuned to Y&R and don’t forget to check CDL often for the latest Young and the Restless spoilers, updates and news.