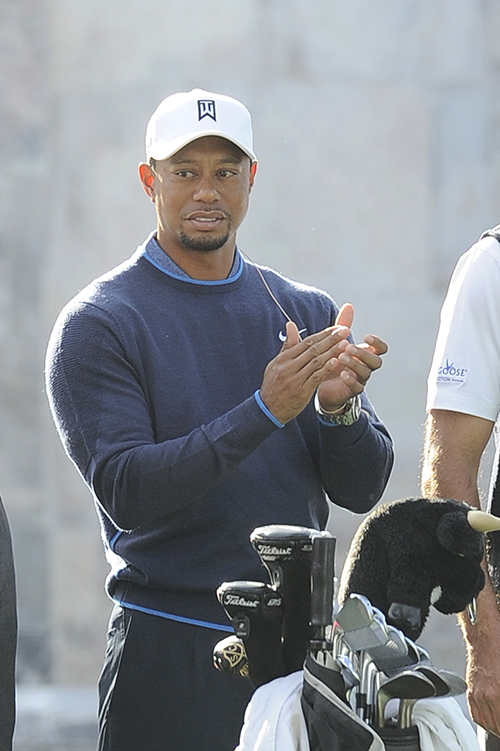 Tiger Woods kids are not his biggest fans, or maybe even fans at all, according to a report that has the golf star looking like less of a man than usual. The National Enquirer has reported that during an interview, Tiger Woods’ daughter, Sam, who is 8, and his son, Charlie, said just one word that spoke volumes. The interviewer asked them ‘who they’d rather be – their famous golfer dad or Argentina’s soccer player star, Lionel Messi.’ The embarrassing reply was not in Tiger Woods’ favor.

“Messi,” Sam immediately says with a big smile and a giggle.’ Charlie gave the same “Messi” response. The source continues: “Tiger laughed it off, but later told a pal he can’t believe his own kids rejected him.”

Yeah. Ouch. You can fail at a lot of things in life, but failing in the parenting department is just not okay. Look at Kris Jenner! The pal continued, “It’s been the worst year even for Tiger, and now, to add insult to injury, he was kicked to the curb by his own kids.”

Yep. That one will sting like no other. Now that Tiger Woods is no longer in a relationship with Lindsey Vonn, who will he be linked up to next?

It can be noted that Lindsey Vonn opened up to The New York Times about her relationship with Tiger Woods, “Thomas was really my first boyfriend, so I didn’t have a lot of dating experience,” she said. “So jumping into a relationship right away after getting a divorce was probably not the smartest move on my part.”

“I don’t regret anything. I loved Tiger, and I had an amazing three years with him. But it was a learning experience as well. With every relationship, you learn what you need and what you want in a partner.”

Do you guys think that there is hope for Tiger Woods? Will he find true love and settle down for real? Can the guy really to commit to a faithful, tried and true marriage? Can he earn the respect he used own back? Drop any thoughts you might have in the comments below!