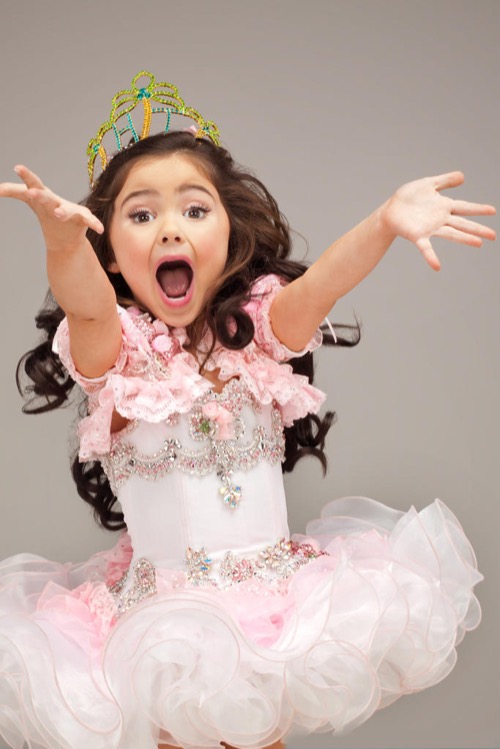 Tonight on TLC  their child beauty pageant show Toddlers & Tiaras airs with an all-new Wednesday, November 9, 2016, episode and we have your Toddlers & Tiaras recap below for you! On tonight Toddlers & Tiaras Season 7 Episode 11, “Emergency! at Universal Royalty,” the announcement of a winner isn’t the only shocking event of the day.

On last week’s episode, Eden Wood is back where her career began: Universal Royalty in Austin, TX. If You missed it we have a full and detailed recap, right here for you!

On tonight’s Toddlers & Tiaras episode as per the TLC synopsis, “For Princess Mehayle, mom Sharilynne and coach Nikki Nicole, pageant day at Universal Royalty only goes from bad to worse! After fierce competition and a slew of mistakes and mishaps on stage, crowning isn’t the only shocking event of the day. ”

After hitting her head, Mehayle’s mother got up off the floor concerned about her daughter’s hair. Meanwhile, Jaimie is hoping that her girls win bigger crowns this time around.

Mehayle’s performance was moved after she wasn’t ready. Abby also had issues when the wrong music came on. She decided to start over and keep going. The judges were impressed that she dealt with the mix-up and pushed ahead. Eden Wood was also impressed.

Mehayle finally returned to the stage with a broken bubble machine. She begins her routine but the music dies too. The judges were not impressed with her.

The crowning begins and all of the girls are anxious. The 1st runner up is Valerie, the Universal Royalty Queen is Kaydence. Jaimie is not happy. She expected a supreme. Kaydence didn’t seem to mind.

For the 8-10 age group, the queen is Mehayle. Her mom isn’t happy and is determined to keep going. She doesn’t make it through the next round. She runs to her hotel room and kneels by the bed, crying and praying to god.

Next up, the grand supreme winners are Abygail, Emily and Payten. During the crowning Mahayle is upset. She knows Abby beat her and she isn’t happy.

The ultimate supreme crown goes to Abby. Jaimie is mad. All the winners take pictures. Meanwhile, Mehayle’s mother is in the hotel room crying and ranting. The crowd waits for Mehayle as she runs back to get pictures with the group.

Coach Nikki feels bad for Mehayle and is brought to tears. Jamie is angry. She is looking forward to the next pageant. She wants to move on to the big one.

Mehayle’s mother is not with it. She’s white and laying down. The ambulance arrives. She explains that she fell in her room earlier. She tells them she slipped after they mopped. They determined that she suffered a pseudo-seizure.

On to International Fresh Faces…

Cambrie wants her girls to be extra prepared. Jamie is excited but she has had a streak of bad luck so she isn’t too sure about how it will go. The pressure is on. She gives her girls a day to play. Tomorrow they focus.

Cambrie thinks her girl Lola is going to win. Jamie is thrilled because she has some pretty cute kids of her own.

Kim and her daughter Selyse are back as part of Cambrie’s team.  During practice, Selyse doesn’t want to practice. She starts crying. Kim is annoyed. She puts her in timeout. Selyse goes crazy, leaving Cambrie unsure if she could go to IFF.