Tori Spelling Reaches Out To Rival Shannen Doherty: Makes Amends With Former Enemy During Her Battle Against Breast Cancer? 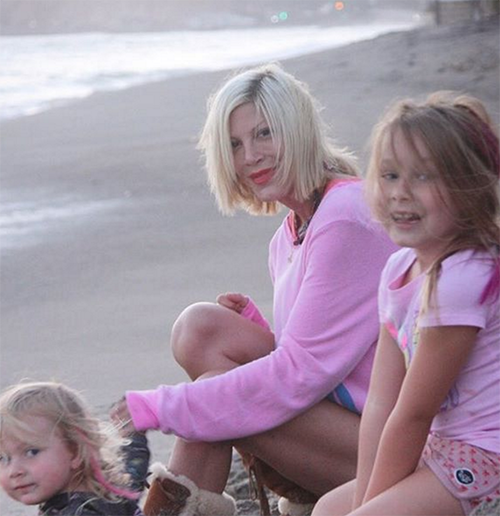 It looks as though Tori Spelling and Shannen Doherty are finally putting the past behind them. That, or the blonde reality television star is trying to make amends with her former friend and foe before it’s too late. There’s a new report that suggests Tori Spelling has reached out to Shannen Doherty, who is currently battling breast cancer.

Just last month, it was reported that Shannen’s breast cancer has spread to the lymph nodes and that it was only discovered after one of her difficult surgeries. The former ‘Beverly Hills 90210’ actress also revealed that she had a single mastectomy earlier this year and had also undergone eight rounds of extensive chemotherapy.

Of course, Shannen has her friends and family by her side, but the one person who hasn’t made an effort to reach out to her was Tori – until now. According to Naughty Gossip, after years of battling with one another, the mother-of-four has finally picked up the phone and called her former rival.

Surely, Shannen has every reason to still feel reserved about allowing Tori back into her life, especially with all the nasty allegations and hurtful rumors she spread about her in the last few years. While promoting her short-lived reality television show, ‘True Tori’, the former actress dished the dirt on all of her former ‘Beverly Hills 90210’ co-stars – just to keep herself relevant.

Tori revealed that she not only slept with Jason Priestly, but she was the one who got Shannen fired from the show. During an interview with Lifetime’s ‘Celebrity Lie Detector,’ Tori branded Shannen as a diva and also dished on all of her on-set fights with her co-stars, which also included Jennie Garth, Brian Austin Green, and Ian Ziering.

Shannen, in return, has said very little about Tori. Although, in 2015, she did admit that watching her former pal reveal the excruciating details about Dean McDermott’s cheating allegations on ‘True Tori’ was too much to bare. Shannen told Meredith Viera on her talk show, “Putting it out there must be cathartic for her. It’s her way of dealing with it, maybe that’s her form of therapy.”

And while there’s no doubt that it’s taken some time for the ice to melt between them, fans can’t help but wonder what Tori Spelling’s motivation is in reaching out to Shannen Doherty. Does she regret all the things she said about her to the media? Is Tori Spelling trying to make amends with Shannen Doherty during her breast cancer battle? Or does Tori have other, secretive motives in trying to reconnect with her former friend? Let us know what you think in our comments section below!

OK… THIS IS THE MOTHER OF ALL @fabfitfun boxes! The Fall Box is INSANE! The Mod Cloth plaid blanket scarf is unbelievably Soft and Huge! I’m obsessed! Plus the best fall eyeshadow palette, cutest coffee tumbler, adorable toe socks, body wash infused buffer, adult coloring book and pencils ( I’ve always wanted one!), and MORE! So go now to www.fabfitfun.com and remember to use code “TORI” and get $10 off! AND, more exciting news… 2morrow I’ll be doing a LIVE unveiling of The Fall Box on Facebook Live! #fabfitfun xoxo