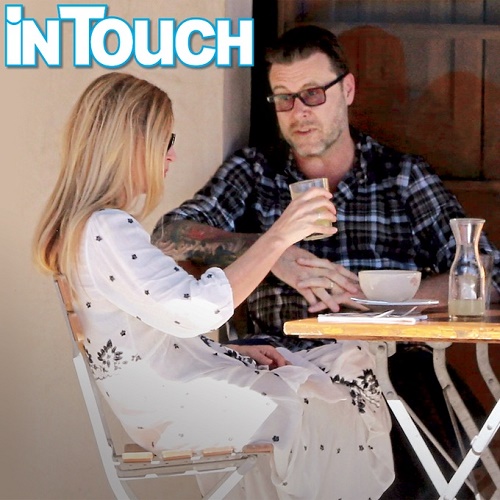 Tori Spelling might’ve welcomed Dean McDermott back into her life after he was caught cheating, but do you think she’ll be just as willing to cut him the same slack after finding out he went to lunch with his ex-wife, Mary Jo Eustace? It’s no secret that Tori worked through Dean’s cheating ways to preserve her family – and perhaps garner more ratings for her reality show – but when will she realize enough’s enough and cut this guy loose for good?

This potentially scandalous news comes from an exclusive report published by In Touch Weekly. Check out the photo evidence, featured above. An inside source for the magazine, who witnessed Dean and Mary Jo having lunch together on February 9th, says, “Mary Jo and Dean were so at ease with each other, they looked like a married couple. They embraced the moment they saw each other, talked for almost two hours and then warmly hugged each other when they said goodbye.”

Even if these two were only eating lunch, Tori undoubtedly feels betrayed, especially after all she’s given up for Dean – and all the forgiveness she’s offered him. Tori’s ill feelings towards Mary Jo aren’t exactly a secret, and one might even go so far as to say there’s some bad blood between the two, which probably doesn’t make this meeting any easier for Tori to stomach.

A friend of Tori’s adds, “Tori has always been threatened by Mary Jo. She’s worried there’s still chemistry there between them.”

And based off the source’s firsthand account of the scenario, Tori indeed might have something to worry about. The source claims, “Dean and Mary Jo looked like a couple that were meant to be. Tori would have been livid if she’d seen them!”

Does Tori have anything to worry about after this meetup? Do you think there’s something going on between Dean and Mary Jo? Could they possibly be working to re-kindle an old flame? Honestly, if they were having an affair, it seems a bit odd that they’d allow themselves anywhere near a public place where they could potentially get snapped by a photographer or fan. But stranger things have happened, especially in the land of Hollywood ridiculosity.

Let us know your thoughts about this story in the comments section below, and don’t forget to check out the new edition of In Touch, which is on news stands now!