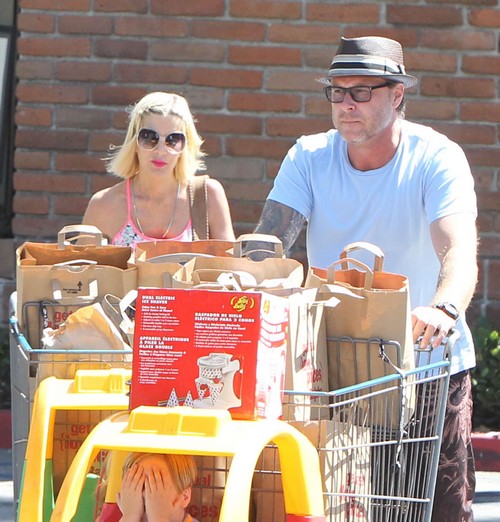 The Dean McDermott – Tori Spelling drama continues on the high-speed train to disaster, which neither of them has tried derailing. Dean McDermott has always been known as a serial cheater, but since the cheating allegations went public last year, he’s had to publicly grovel at Tori Spelling’s feet to keep his famewhore D-list reality star career. In fact, Tori and Dean managed to capitalize on the scandal, landing True Tori and a multi-million dollar deal. Perhaps they were hoping to revitalize their careers or perhaps they were stupid enough to think that fake fixing their fake marriage on TV would land them other roles. Whatever they thought, Tori is now having to deal with Dean’s temper tantrums on her own and Dean’s ex-wife, Mary Jo Eustace, is now laughing at Tori.

Well, Mary’s not actually ‘laughing’ at Tori, or at least, not where anyone can see her. But Mary did make an appearance on the latest episode of Lifetime’s True Tori, where she basically told Tori that Dean is her problem now. In fact, her exact words were, “I mean, he’s a total knob. I know that. But he’s your knob now.”

Plus, Mary Jo basically tells her that Dean can’t stop himself from cheating, and that no matter what, he would have found himself hooking up with other women. Plus, Mary Jo also tells Tori that Dean only went after her because of her parents and her family legacy, knowing that he’d be financially secure no matter what happened. Perhaps he didn’t count on Tori’s mother, Candy Spelling, refusing to give Tori her millions – but either way, even the most naive idiot would be able to tell that Dean McDermott has been using Tori Spelling all these years. And you know, that works out just fine considering that Tori was also using Dean, even though she pretends she wasn’t. See, there’s always a benefit to being D-list reality famewhores: it’s not insulting to hear that your husband doesn’t give a rat’s ass about you in real life.