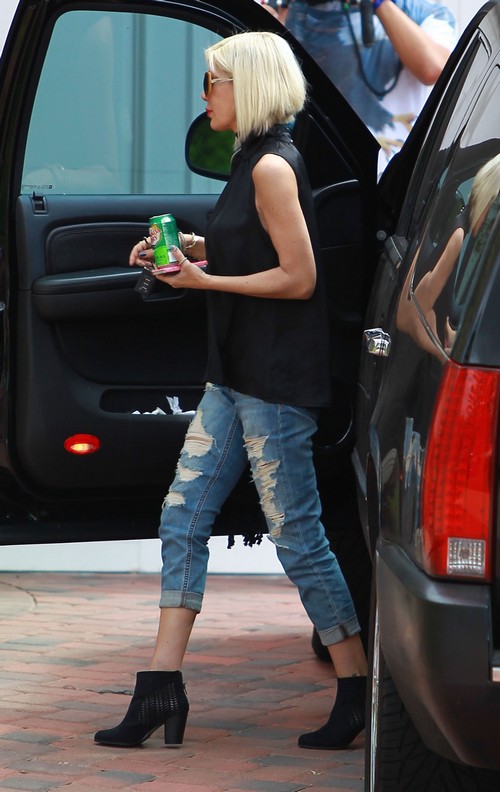 Tori Spelling pregnant again? Reports are that Tori Spelling was spotted in maternity clothes pregnant with her fifth child. If this is true then cheating Dean McDermott is both as crazy and as desperate as is his wife. Anything for another season of ‘True Tori’, right?

Most couples cannot plan in advance the number of weeks it will take to work through problems they are having, yet oddly enough, Tori Spelling and Dean McDermott have this down to a science.  All marriages have their challenges, especially when there has been infidelity. Fortunately for Tori and Dean, they’ve been able to map out the number of weeks it will take to get to that happy ending, and somehow the cycle of ups and downs and dramatic climaxes all seem to play out and end on a happy note within eight weeks. How perfect for Lifetime, because it just happens to fit into their program scheduling. Wow, Tori and Dean could write a book on how they’ve mastered this skill! And if there is money involved, surely we can expect it in the near future.

Yes, CDLers, you will soon be in Tori and Dean’s living room  once again as they continue to “navigate their way” through dealing with their ongoing marital problems—fake affairs, PR-driven pregnancy rumors, really bad hair days, and a cringe-worthy attempt at a singing career.  Conveniently for Lifetime, the problems in Tori and Dean’s marriage seem to correspond directly with the network’s programming schedule because unlike most couples, Tori and Dean’s marriage is only in crisis on a seasonal basis. Sort of like allergies, I guess. Tori sure is fortunate that her Mystery Girls series with pal Jennie Garth was cancelled after one season. She would have had to deal with trying to act in Mystery Girls just when her season marital problems crept up again. Given the ratings of the freshman show with Garth, juggling two shows with bad acting was never a concern.

While most couples must struggle through any marital problems without the benefit of a set schedule for when the drama will end along with a fat paycheck, Tori has made a career of it. And there is no Marriage Boot Camp or Couples Therapy for her—she needs a far bigger paycheck in order to keep her family afloat. However, since the first season of True Tori was rated in yawns instead of stars, Tori was made aware by producers that she needed something a little more interesting this time around. So, as the previews for the second season of True Tori, Tori leaves us with a little teaser that she may be pregnant with baby #5. However, as viewers may recall from last season, each hyped-up episode ended up falling very flat. Honestly, the previews for each episode were far more interesting than actually sitting through the actual episode. The drama that was promised at the end of each episode in order to hype up the next, however, never came to fruition. Last season’s big finale promised “all of the questions viewers had for Tori would be answered,” but viewers were left with only fake tweets with fake questions for Tori and Dean, and an “I can’t answer that” or two from Tori. Somehow this “pregnancy scare” feels as though it may follow a similar path…..to nowhere.

An allegedly pregnant Tori has reportedly been spotted around town wearing maternity clothes, says In Touch Weekly. Well, I think we all knew that was coming since it is almost time for the second season of her marriage drama to begin. If she doesn’t have something more interesting to offer this season, she may actually have to *gasp* work on her marriage in private….without a paycheck, film crew, and writers to help! Now that would be some real drama. Well if True Tori season 2 is another bomb for the couple, perhaps they can make their way through the reality TV circuit like Kendra and Hank who have their show Kendra on Top, have done an episode of Celebrity Wife Swap (apparently the episode without real celebrities), and are moving along next to Marriage Boot Camp. Don’t be surprised if Kendra has Hank Jr. on Dance Moms next season! Better catch up, Tori…er…I mean “keep working on your marriage.”

CDLers… I know you must agree on this one. Aren’t we done with Tori and Dean??