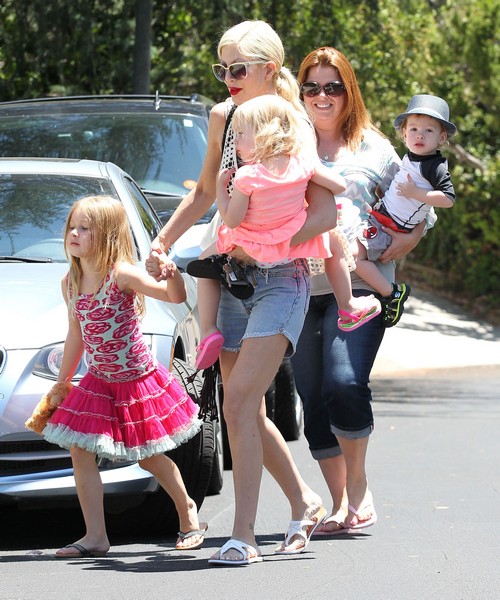 Just when it seemed like Tori Spelling’s life couldn’t become any messier it looks like she has indeed found a way to make it even more difficult. If you tuned into True Tori, her hot mess of a reality show with hubby, Dean McDermott then you watched the couple totally unravel in made-for-television therapy sessions. Tori was looking for a “grand gesture” from Dean to prove that he loved her and wanted to change. According to the July 7th print edition of Star Magazine, off camera Dean offered to have another baby.

Sources say that Tori immediately agreed to the idea in spite of the couple previously saying four kids were plenty. There have also been conflicting stories about who actually takes care of the kids. Tori has said that Dean often checks out of family life but those close to the couple claim that he is often like Mr. Mom. Either way the real reason for a 5th child is simple, money. It ensures another season or two for their reality show and it gives fans and foes alike a reason to pay attention to them which again equals money.

The real question is whether or not Tori is already pregnant. Rumor has it before Dean left to begin filming his cooking show in Canada last month getting pregnant was a priority. Could Tori’s current super skinny look be due to morning sickness? Saying she’s like to have a 5th child is one thing but do you think that she actually is foolish and irresponsible enough to bring another child into her messy family life? Tell us your thoughts in the comments below!

Troubled actress Tori Spelling and her kids Stella, Hattie and Finn stop by a friends house in Sherman Oaks, California on June 22, 2014. Its being reported that Tori’s husband Dean McDermott has checked into rehab for sex addiction after he recently cheated on Tori.