Tori Spelling And Dean McDermott’s ‘True Tori’: Preplanned Episodes And Contracts – Show Not True At All! 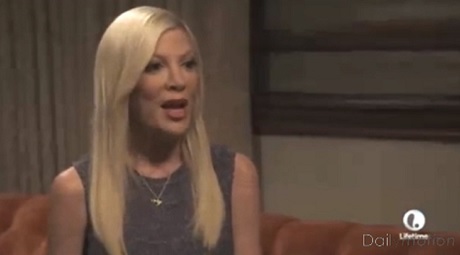 The more thought put into the fakeness of True Tori, the more speculation you will have about its authenticity. For example, during the reunion special, Brooke asked Tori why she decided to allow cameras to follow her as she went through this very personal experience. Tori responded that she wanted to show how she was able to find her strength and how much she’s grown as she worked through the problems, even stating that she wants her kids to watch the series when they are older (if they were not able to escape any sooner). Funny how she knew things would turn out well beforehand. So, premonition, or just good sTORI writers?

Imagine if Tori had cameras following her and somewhere mid-episode about halfway through the series Dean blurts out that he cannot stand her and has cheated on her repeatedly. Would that have been something she’d be willing to document and share with the world? I think not. Anyone going into something like this would HAVE to know that things will go a certain way (as in the way she planned) or they wouldn’t offer it for public consumption. Doing so would leave them completely vulnerable.

Tori’s response about doing the show, how she found her strength, and wanting to document her fight for her family shows that she knew the ending before filming even began. Isn’t it funny how they were able to plot their grieving, therapy, and healing all into a perfect amount of episodes (ahead of time), with a reunion and a “confessions” show to follow. I can hear the contract negotiations now.

Tori: “My husband cheated on me and I am so devastated. We are going to see my counselor and work on our marriage. I want to document this for my children to one day watch to see how strong and brave I was to find my voice. So…what do you think…like 10 episodes?

Producer: “Sure, and let’s drag it out by adding a couple shows after where you rehash everything again and again.” Tori: “Great. And I have an idea to get Dean’s music career going too! So, let’s see….grieving and devastated can be episodes 1 and 2. Next is therapy where Dean will get frustrated and walk out…that can be on episode 3….”

Producer: “Great…I’ll get the writers on it now. While they’re at it, I’ll have them come up with some fake tweets we can use for the reunion special.”

While that may not have been the exact conversation, it really couldn’t have been too far off. Even with editing, it seems all too perfect that they got from Point A to Point B in a specific number of pre-planned episodes. And how about those fake tweets? Thanks to Jezebel, who did some digging into the validity of the tweets, we now know that those have been faked as well!

Our friends at RealityTVScandals.com pointed out the same and shared some of the tweets that were exposed by Jezebel. The tweets were shown during the reunion show when host Brooke Anderson shared only FOUR supposed questions from supposed fans. Oddly enough, two of the four tweets came from accounts that had a total of two tweets, and one more account had only one tweet! Here’s what Jezebel discovered:

The first was credited on the screen as being from @2RedSoxGirl16, a user that doesn’t exist. But since the “2” and the “@” button are the same, I figured that might be a typo. I was right! @RedSoxGirl16 is real. Except that the only time she ever tweeted was to ask Tori and Dean a question.

Interestingly, of the 20 people whom RedSoxGirl16 follows on Twitter, one of them is Ryan Sommer — a veteran of reality television production (he’s worked on several Kardashian shows) who has been tweeting up a storm about True Tori for the past month. His Twitter handle is @RySommer, which brings us to the next viewer-submitted question.

This one was supposedly submitted by Elaine Rona, with the Twitter handle @2RySommer. That account doesn’t exist, but it’s very similar to Ryan’s handle.

The next question was submitted by @NicoleyBlais, which is a real account, but its only two tweets are questions for Tori and Dean.

The fourth question was submitted by someone named Lisa Valentine with the handle@Lisav1234. That account does exist, but it’s credited to a woman named Lisa Vargas who only tweeted twice, both over a year ago.”

Now, RealityTvScandals.com also shares more interesting news…Tori and Dean want a spin-off of them renewing their vows. So, just add that line to the Tori/Producer discussion above, because you know they MUST have had that thought out in advance as well. RealityTvScandals.com also keenly point out some excerpts from her books that demonstrate how she can go from a heated argument, break into a dance, then back to her heated argument.

“Once a season got going, there were all sorts of edits we had to make along the way in order to tell a cohesive story. There were also some great moments that we had to edit out of Tori & Dean. One time Dean and I were in the kitchen having a heated parenting debate. Just as we asked Patsy which of us she thought was right, her phone started ringing. Patsy’sringtone was some disco groove. Everyone in the room— Dean, me, the cameramen, the producers— we all stopped what we were doing and danced to the ringing phone. Then it stopped and we immediately picked up the conversation where we’d left off.”

Does anyone still believe there is any truth to this show? No need to answer—that was a rheTORIcal question. Okay, okay…tell us what you think below!