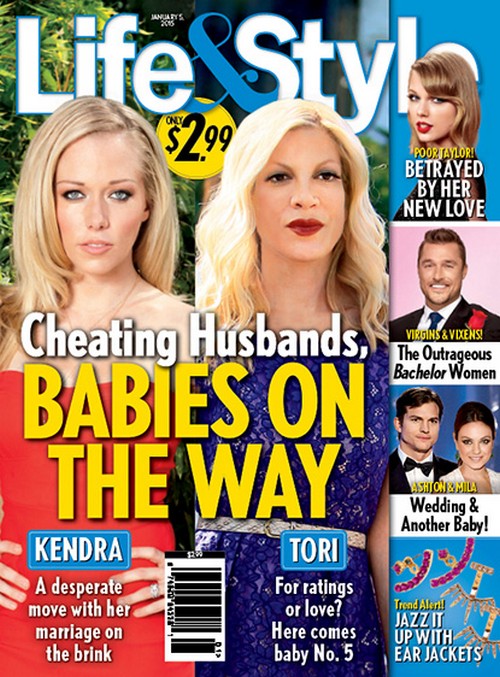 Kendra Wilkinson and Tori Spelling both appear on the cover of this week’s issue of “Life & Style” magazine. Inside this issue, the magazine claims that with cheating husbands, both stars are pregnant!

As you’ve probably heard, both Dean McDermott and Hank Baskett have had problems keeping it in their pants in recent months, but the pregnancies are quite the surprise for the holiday season. Both Kendra and Tori have been dogged by rumors of an impending divorce this year, but neither have seemed to go through with it completely.

The bigger question is whether or not Kendra’s pregnancy is by Hank – just because of the rumors floating around about her having payback sex with Shawne Merriman. She might be trying to get back at him for his indiscretions with that transgendered model that he was allegedly hooking up with.

Tori’s problems with Dean apparently run deeper than just a cheating scandal. These two have been plagued by rumors that they are on the verge of bankruptcy. It’s got to be hard, considering that they already have four children together. Could you imagine Tori being pregnant with child number five and they can barely pay the bills as it is? Hopefully Candy Spelling will reach into her giant bank account and throw down some cash for Tori and Dean to be able to survive.

Is Kendra’s pregnancy possibly an attempt to keep Hank on the straight and narrow? Some women think that a baby will provide a bandaid for an already ruined relationship. The magazine also asks the obvious question of whether Tori and Dean’s fifth baby is for the sake of their marriage or for ratings for her reality show? It only remains to be seen which of these is true, so we’re just going to have to wait and see.