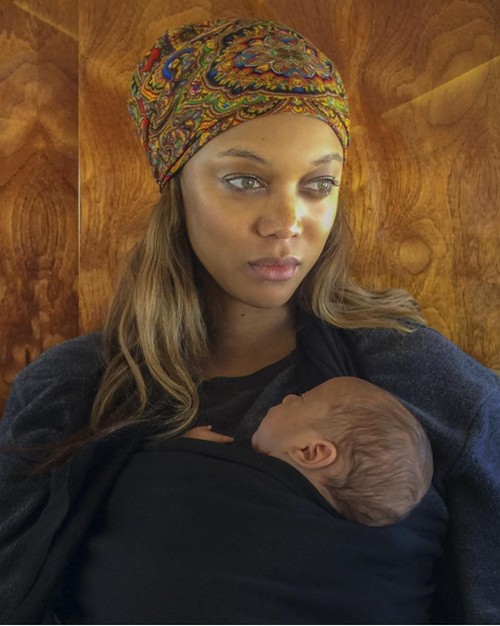 New mom Tyra Banks took to social media on Valentine’s Day to finally share a photo of her new baby boy, York! The “Next Top Model” host revealed last month that she and her boyfriend Erik Asla were the proud parents of a healthy baby boy, who was born via surrogate. At the time of York’s birth, Tyra only shared a photo of a baby’s hat – not her actual son.

On February 14 Tyra shared the first photo of York with the world on her Instagram page. In the photo, York appears to be sleeping – and is wrapped up closely to Tyra. The TV personality captioned the adorable photo, “This is the Happiest Valentine’s Day of my life. York, Daddy @erikasla and I send you so much love.”

Although we can only see the back of baby York’s head – and a tiny glimpse of his nose, but it’s pretty obvious he is one good looking baby, and how couldn’t he be with Tyra Banks’ genes? When Tyra confirmed in January that her son was born via surrogate, she also revealed that York was created with her eggs and boyfriend Erik Asla’s little swimmers – although he was hatched in another woman, York is 100% a Banks-Asla baby.

So far Tyra Banks has been pretty private about her new baby boy, we can’t wait to see more amazing photos of her and baby York. Motherhood looks good on her! And, can we just say that even the back of York’s head is photogenic – we might have another model on our hands! Check out the super adorable photo and let us know what you think in the comment section below!

This is the Happiest Valentine’s Day of my life. York, Daddy @erikasla and I send you so much love.