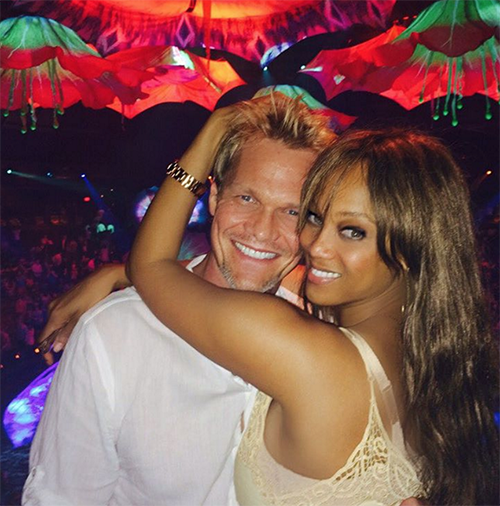 Tyra Banks is a mom! The host of “America’s Next Top Model” took to social media in the wee hours of the morning on Thursday, January 28 to announce that her baby boy, York Banks Asla, had arrived! Some of Tyra’s followers were baffled by the news seeing as how Tyra was never actually pregnant herself – the former model and television host had struggled with fertility and she and her boyfriend Erik Asla had hired a surrogate to carry their baby.

Tyra shared a photo of an adorable striped baby’s hat on Instagram and captioned it with this sweet message, “The best present we worked and prayed so hard for is finally here. He’s got my fingers and big eyes and his daddy Erik’s mouth and chin. As we thank the angel of a woman that carried our miracle baby boy for us, we pray for everyone who struggles to reach this joyous milestone. York Banks Asla, welcome to the world.”

In the Fall, Tyra had a minor meltdown while co-hosting FABlife – and while Chrissy Teigen discussed the issues she was having trying to get pregnant, Tyra confessed that she too was in the same boat. The “America’s Next Top Model” host went on an emotional rant while discussing infertility, stating, “Why am I crying? You just have no idea what people are going through, so when you ask Chrissy that or me that or anybody that, it is none of your frigging business, okay?”

Surrogacy has become very popular over the course of the last few years – and there are several different ways to go about the procedure. It sounds like Tyra Banks and Erik Asla opted to have Banks’ and Asla’s eggs fertilized and then planted in their surrogate, to ensure that the baby shared both of their DNA – because Tyra noted that the baby had her eyes and Erik’s chin.

So far, no photos have surfaced of baby York – we can’t wait to see him! CDL would like to congratulate Tyra and Erik on their newborn baby, and officially welcome York Banks Asla to the world!