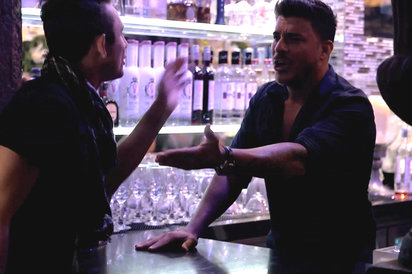 James was now dating someone new. He had apparently met Raquel who is beautiful and smart however she was a little more career driven than most of the woman that James regularly dates. So he had found someone that challenges him and she could be part of his support system. But James lies to her like he lies to everyone.

He had told her that the headlock thing because of jealousy and he only rarely mentions to anyone else that he could be annoying or that he has been known to push people’s buttons. And so Raquel had probably never seen James truly drunk because a drunk James is always a problem.

James had been once before by Lisa about drinking and she said that she would fire him if he ever tried to drink on the job again. However, James had reportedly been showing up to work drunk and so Lisa doesn’t know what to do with him on tonight’s all new episode. Lisa had wanted to fire him yet she said that she needed definitive proof that he was drunk and that she couldn’t rely merely on gossip.

So she decided to wait on firing James and chose to deal with all the other problems she had on her hands like the mean girl atmosphere that appeared to be taking over her restaurant. And was mostly Katie’s fault.

Katie, Kristen, and Stassi were basically mean girls. They were good friends to have though they tended to turn on the people they care about as a part of a split decision and no one held a grudge like them. So the latest problem that Katie and thereby everyone else had was the fact that Scheana looked to be too friendly with Lala.

Lala was someone that they all thought less of and they had her pegged as a whore if nothing else. Yet, Katie believed that Scheana had seemingly betrayed them all when she was caught laughing with Lala and so she got riled up. And then got the others riled up as well.

Katie started saying that Scheana wasn’t supporting her in her decision to apparently hate Lala and so she fell back on some of her old behavior that Schwartz hates. Schwartz hates when Katie goes to the darkside and attacks people for no obvious reason. Though Katie didn’t see that side of herself and that’s why she kept continuing it.

Katie had a problem with Lala and had wanted all of her friends to hate the woman as well. So Katie got vengeful. She kept taking Scheana to task for her betrayal and all but forced Scheana into later being a mean girl herself. Scheana had had to tell Lala that they couldn’t be friends and that she didn’t want to talk to her just so Katie was happy.

But it turns out that nothing makes Katie happy and that she lives to be upset with someone. Katie still talked to Scheana about how Scheana could be a better friend and she also started a fight with Schwartz when she didn’t have to. So the problem with Schwartz was the fact that he was in therapy. Schwartz had seemingly felt the need to regain clarity so he began going to therapy and had thought it was time to talk to Katie about why he may have some reservation about marrying her.

Schwartz had told his fiancée that her darkside had made him often uncomfortable and that he wanted to be able to talk to her without her going off on him or shutting him out.

So what does Katie do? She chose to hear the part that Schwartz said he had doubts about marrying her and focus entirely on that. Katie had said that they were in the middle of planning their wedding and that he had said the worst thing he could ever say to her.

However, Katie chose to ignore the part when Schwartz wanted to talk about their feelings or find a new way to communicate that didn’t always end in the fight yet Katie didn’t want to hear any of those other things. She just wanted to get married and to have Schwartz basically side with her whenever she felt like he should.

Only Schwartz hates it when she does that. He feels like Katie should let go of the clique mentality now and that she should return to how she used to be when Stassi was gone and Kristen was barely in their lives. So Schwartz did something that he knew Katie wouldn’t like.

Schwartz decided to ask Ariana to be one of his groomsmen even though Katie hadn’t wanted her to be a bridesmaid because of Ariana’s friendship with Lala. Yet, Schwartz didn’t care about anyone talking to Lala and the only thing that concerned was the fact that Ariana was a friend. And that she was being treated like an outsider.

Both Ariana and Tom were fine with talking to Lala and James, but Tom was someone that Katie couldn’t talk about and so Schwartz extended that loyalty to Ariana. He asked Ariana to be his groomsmen and she said yes by eating the nasty food he had made for Tom and Jax. So that was settled and everything should have been fine.

Though Jax for some reason had chosen to rile up James over some girl he slept with while he was dating Raquel and that led to James going off. James had gotten drunk, he began yelling at the girl, and he had also yelled at Jax for starting with him out of the blue.

So Lisa had heard about it and she had seen it for herself however she was tired of giving James chances and so she fired him.