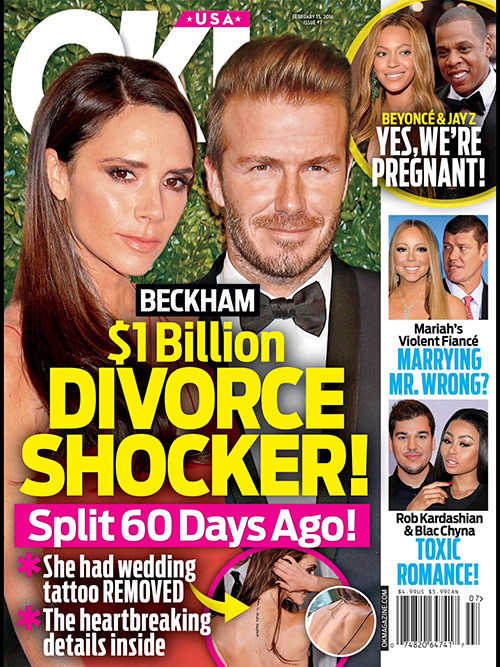 Are Victoria Beckham and David Beckham headed for divorce? The nearly 17-year marriage may be over and the couple is quietly dividing up a nearly $1 billion empire. Victoria and David appear to be living separate lives.

Has residing on different continents sabotaged David and Victoria’s happy union? For months David has been in Miami working tirelessly to bring a Major League Soccer team to the area. Miami Beckham United has encountered a few stumbling blocks over financing and location of the new stadium.

While David is away in America, Victoria is tending to the Beckham’s four children at the couple’s London home. As previously reported, the former Spice Girl has concerns about Becks faithfulness. Victoria is most concerned that David will purchase a million dollar bachelor pad and throw wild parties with lots of beautiful women in attendance

OK! sources recently revealed that the Beckham marriage is tension-filled and that “after years of trying to make their relationship work it looks as though [David and Victoria] are figuring out their exit strategies.”

An insider pointed out that David Beckham and Victoria Beckham haven’t been photographed together in a couple of months. One also noted that Victoria’s Hebrew marriage vow tattoo appears to have been removed.

Everything may look lovely on the outside for the gorgeous couple, but years of cheating allegations may have finally caught up with David. Becks and Posh have continually denied the adultery charges but one insider divulged that the nonstop speculation has strained the marriage, and turned Victoria into a virtual recluse.

There are reports that David often complains that their sex life is unsatisfactory to the point of being nonexistent. Purportedly, Victoria tells friends David is “useless and lazy.” And no, the insider divulged, the Beckhams don’t think marriage counseling will help them rekindle the romance.

David Beckham and Victoria Beckham married in July 1999 without a prenuptial agreement. Allegedly, the Beckhams are trying to work things out amicably and fairly. Once the billion dollar Beckham empire has been divvied up, Becks and Posh will allegedly file for divorce and move on with their lives – separately.