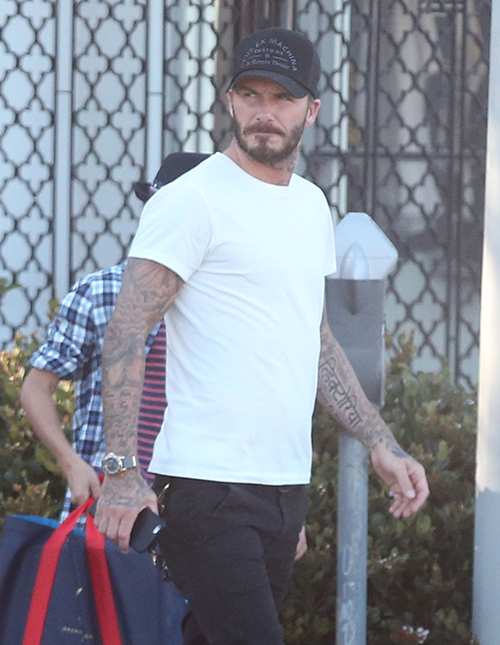 Plans for the MLS team Miami Beckham United are finally moving forward after nearly coming to screeching halt. Nothing is completely finalized just yet, but Becks is frequently traveling back and between London to Miami in order to finalize the deal.

Once the world-class soccer team is ready to start playing, Beckham will need to spend more and more time in the sun-drenched city. And that’s what has Victoria just a little bit concerned.

The plan has been for Victoria to remain in London with the couple’s four children – and she assumed David would stay in luxury hotel suites while in Miami. But, apparently, that may not be the way things will play out. David has expressed interest in acquiring Pharrell Williams’ 9,000-square-foot penthouse, a source recently told OK!

Victoria Beckham is reportedly not thrilled with the idea of David having what is essentially a bachelor pad in a city filled with beautiful women. She’s overly concerned that Becks will throw wild parties and entertain dozens of women in the massive penthouse.

David Beckham probably isn’t going to have much time for wild parties with dozens of women in attendance. Becks has encountered roadblock after roadblock to bring the Major League Soccer team to Miami. Having a REAL place to call home rather than random hotel suites seems to be a good idea – and an excellent investment as well.

The penthouse David wants to buy is – again – 9,000-square-feet. That’s more than enough room for Victoria and the couple’s four children, Brooklyn, 15, Romeo, 13, Cruz, 10, and Harper, 4, to spread out and call home when they come to town.

If Victoria Beckham is worried, she should relax! David Beckham appears to be just as in love with his wife as the day they married. The power couple has built quite the empire and have a wonderful family.

Do you really think Becks would put that in jeopardy by entertaining gaggles of women? Starting a world-class soccer team will keep David busy enough.