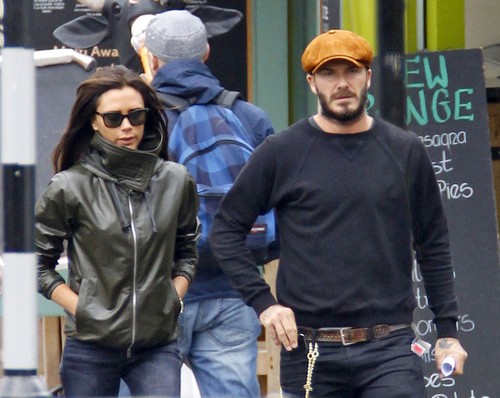 Victoria Beckham and David Beckham reportedly have the most perfunctory relationship in showbiz, which is saying a lot. But honestly, David’s alleged past affairs had to have driven a pretty strong wedge between him and his wife, even though she technically forgave him, means she didn’t divorce him… yet. Since the birth of their youngest child and first daughter, Harper Beckham, the two have definitely seemed closer but reports suggest that their marriage still retains a ‘business-like’ sheen.

A report from OK! Magazine suggests that since both stars are workaholics, it hasn’t allowed them much time to work on their marriage. OK!’s source explains, “The workaholic couple have spent more time working on their careers and raising their four kids that they have on romance. Their marriage has been more like a business.”

I’m not really sure I agree with that, actually. See, when David and Victoria first met, they were technically both ‘working’ – i.e., David was playing soccer and Victoria was part of the Spice Girls. But when the Spice Girls split up, there was a large period of time after where Victoria didn’t do anything. That was actually during the period that their marriage suffered the most, where David allegedly had affairs and Victoria was supposedly on the verge of divorcing him. But then she founded her fashion line, he quit the national team, and they moved to the US – and have been happy ever since.

It seems like they’re doing just fine without OK!’s advice, even if their marriage did resemble a ‘business’ at a certain point. Besides, with that many children, there’s little chance that they’re going to divorce now. If they were going to split, they would have done it a long time ago.

Soccer legend David Beckham and his wife Victoria look a little grumpy as they run errands together in London, England on June 11, 2014. The couple, who blended seamlessly among the crowd, looked to have a lot on their minds.