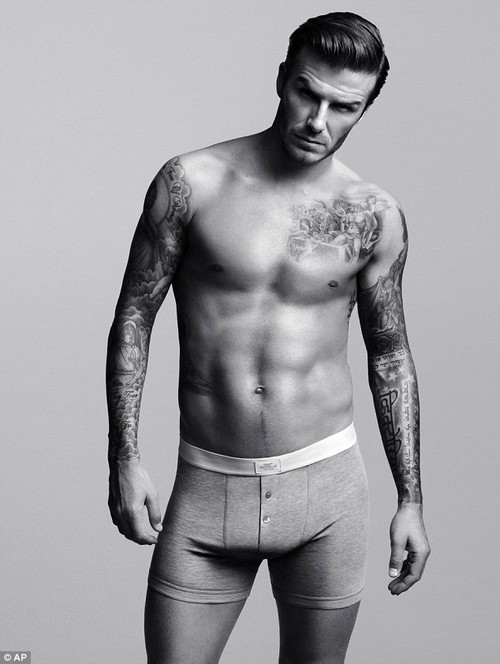 If this story is true [a big if], for shame, David Beckham. According to Star Magazine, David Beckham stuffed his crotch for his recent H&M underwear ads. Star uses a supposed expert and stylist to tell if David’s crotch area has been artificially enhanced at all, and this supposed stylist explains, “David is definitely ‘enhanced’ for his new Super Bowl ads.”

This person also adds, “In order to make the bulge look so pronounced in the photos, David’s underwear has to be carefully stuffed and padded to create the illusion.”

There have been a lot of rumors about the size of… ahem, David’s ‘package’ over the years. And let’s not forget that 2 years ago David was accused of the exact same thing! But each time, people always say the same thing – that there’s no illusion and that it’s exactly what it looks like. I guess Victoria Beckham is a lucky lady, no? Well, apart from the cheating and infidelity.

Anyway, it’s impossible for an ‘expert’ to tell if David really did stuff his pants or whether it was digitally enhanced. With photoshop and today’s modern use of technology, it’s easy to make anything look bigger than it really is – even the size of someone’s ‘package’.

Of course, even if the rumors are true and David’s never been padded in any underwear ads, he could still have flattering angles that make his crotch look bigger. Isn’t photography all about flattering angles anyway?

What do you guys think? Is David Beckham stuffing his crotch for his underwear ads? Or does it naturally look that way? Or is there some other manipulating involved, either through digital enhancement or lighting/angles? Let us know your thoughts in the comments below.