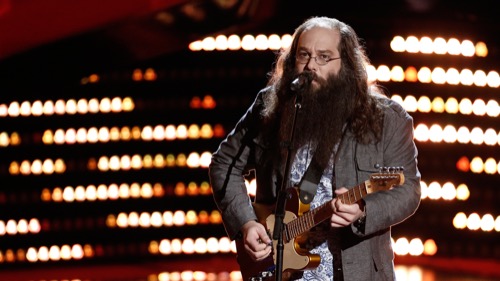 Laith Al-Saadi of Team Adam chose to perform live “Born Under A Bad Sign” by the Albert King (Covered by Cream) this week for his Top 12 song performance.  Did you watch tonight’s show? In case you missed tonight’s show, CDL has you covered – read our full and detailed recap right here! And if you missed any of the videos – check those out right here.

On tonight’s Top 12 episode, Laith sang “Born Under A Bad Sign” from Albert King (Covered by Cream) as his live performance and this is the judges’ comments about his performance:

“Blake says he doesn’t know that much about the blues but that’s as good as it gets.  Blake says he shined with the big ole voice and big ass beard and says it’s working for him. Pharrell says he’s great and tells the audience Laith is the real thing with real spirit and a rock and roll soul. He says the guitar solo at the end was amazing.

Pharrell says America, you’ve got to vote this guy through. Adam says he’s so proud to have him on his team and says he’s different and refreshing from other artists on the show. He calls him a ridiculous unbelievable singer who gives everything. He says he keeps getting better.”