Who Will Be Voted Off Dancing With The Stars Latin Night? – Season 22 Week 2 POLL 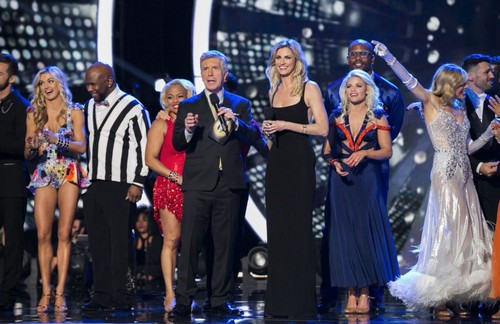 Who will be voted off DWTS this week’s show which features Latin Night – vote in our poll! Last week the Dancing With This Stars 2016 premiere aired on ABC, and on Monday March 28 the first couple of the DWTS 2016 season will be voted off and eliminated.

The 12 celebrities dancing on Week 2’s show on Monday, March 28 ready themselves for Latin Night, one of the hottest nights in the ballroom, with each celebrity performing either a rumba, salsa, samba, paso doblé, cha cha, or Argentine tango.

After just one week of performances, it’s a little tricky to gauge who will be voted off Dancing With The Stars, but we can almost definitely tell you which couples will be safe.

Check out our predictions below and vote in the poll and let us know which couple you this will be eliminated.

Nyle DiMarco emerged as a frontrunner in Season 22 after his performance on the opening night. Of course the fact that the judges and viewers at home are impressed with the fact that he is a deaf and can still catch the beat will definitely carry him far in the competition. Having fan favorite Peta Murgatroyd by his side is definitely helping his case as well.

Val Chmerkovskiy rarely bows out of the Dancing With The Stars competitions early – and he just won with partner Rumer Willis two seasons ago. He is definitely the man to watch. And, with an ABC news anchor as his partner, and getting a ton of extra promotions, they truly are a force to be reckoned with in Season 22.

Ahh, the third couple in the three way tie on the leader boards this season. Wanya and Lindsay’s impressive moves were a bit unexpected during the Season 22 DWTS  premiere. Their scores combined with the number of dedicated Boyz II Men fans out there should keep them safe for a few weeks.

Any athlete, regardless of the sport usually tend to hang in until about the middle of the competition. Training for the NFL half of his life definitely has him in decent enough shape to outlast some of the other contenders. The judges seemed to be big fans of Antonio too.

Ironically, fellow NFL player Won Miller also tied Brown with a score of 21. They probably aren’t the best dancers out there, but there are definitely much worse ones on Season 22 that will most likely be voted off DWTS first.

Paige VanZant is a total badass in MMA – but she actually turned out to be pretty graceful, and pretty emotional – both redeeming qualities that no one saw coming during the Dancing With The Stars premiere. Mark Ballas is a season dancer, with his skills and Paige’s potential, they could wind up going pretty far this season.

COULD GO EITHER WAY

In Kim Fields’ defense – she did fair much better than most Real Housewives do on DWTS. But, the fact that the day after the premiere she announced that she was not returning to RHOA and threw a little shade at the franchise, could mean a huge loss in votes that she would have gotten from Bravo junkies.

Sure, she scored a 21, which is a decent number. But, let’s not forget – a huge part of who gets eliminated on the show is based on fans’ votes, not the judges’ scores. And, the fact that she was married to Donald Trump could win her many votes.

Jodie Sweetin and Keo Motsepe thought they would clean house at the premiere by making the bold decision to do a difficult Tango and pairing it with a ‘Full House’ tribute. It backfired a bit, and they probably should have waited until Jodie had a bit more experience before rolling out their tango. Either way, she definitely has potential. Hopefully America will recognize that and their votes will reflect it.

Did Geraldo even dance during his performance on the premiere? It was painful to watch, but so were a few of the other dances – and only one person can be voted off during Week 2. There is a tiny chance it won’t be Geraldo Rivera…TINY.

Okay, who honestly expected Mischa Barton to nail her performance right up until she took her first step? Maybe it’s just because she LOOKS like a dancer. Hopefully some diehard OC fans out there plus her former co-star Rachel Bilson campaigning for her will buy Mischa some votes.

Poor Doug Flutie. Apparently, he doesn’t have the same natural ability on the dance floor that some of the other NFL players boast, although he is a little older. One thing Doug Flutie does have is a lot of loyal fans. There’s a decent chance he will get to stick around a bit longer – just because Geraldo will most likely be voted off first.