Who Will Be Voted Off Dancing With The Stars Season 22 Week 3? – Vote in DWTS POLL 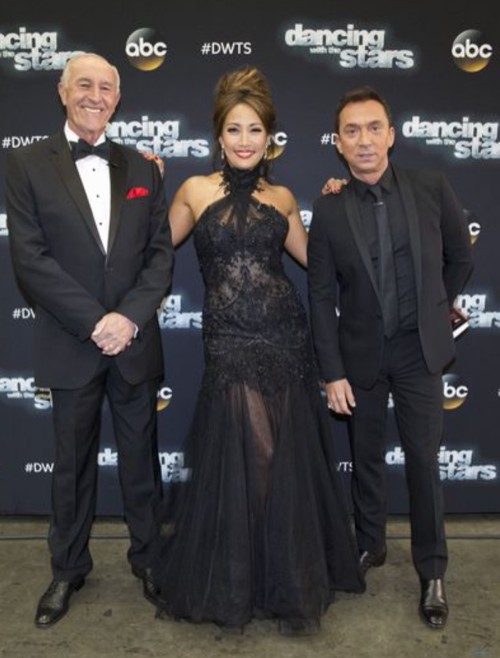 Who will be voted off Dancing With The Stars Week 3? We have only seen two weeks worth of dances on DWTS Season 22, but frontrunners are already emerging – and it is becoming pretty clear which celebs could go all the way in the competition, and which celebs will be sent all the way home.

Last week we saw some pretty amazing Latin dances (and some pretty horrible ones), and for Dancing With The Stars episode airing on Monday April 4 the contestants and their partners will hit the stage again with their ‘Most Memorable Year’ performances. So, who will be voted off Dancing With The Stars Week 3? Well we broke it down for you – don’t forget to vote in our poll and let us know what you think!

UFC fighter Paige VanZant has proven that she is a force to be reckoned with in Season 22. Despite the fact that she lost pro Mark Ballas at the last minute – she still managed to be at the top of the leaderboard in Week 2. DWTS spoilers tease that in Week 3 Paige and Alan (or Mark if he is cleared) will be dancing the Paso Doblé to “300 Violin Orchestra” by Jorge Quintero. We might as well get accustomed To Paige VanZant, she is not going anywhere, any time soon.

Boyz II Men alum Wanya Morris has definitely been a surprise contender in Season 22. Despite the fact that he is far from the younger age group on this cycle of DWTS, he seems to be giving them a run for their money. Dancing With The Stars Week 3 spoilers tease that Wanya and Lindsay will be performing the Waltz “National Anthem 96’ Olympic Ceremonies” by Boyz II Men. How appropriate.

‘Fuller House’ star Jodie Sweetin is a tough competitor to beat this season. Not only does she have basic dancing skills, but she also has the “Underdog – I’ve Been Sober For Five Years” story working in her favor, plus she has legions of devoted ‘Full House’ fans that will keep voting for her every week. Jodie’s Week 3 dance will be the Foxtrot to “Rise Up” by Andra Day.

Let’s be honest – anyone with Val Chmerkovskiy as their pro partner is not going anywhere, anytime soon. Of course, the fact that Ginger Zee already works for ABC on ‘Good Morning America’ and her co-stars are campaigning hard for her votes is definitely another strength she has going for her. To top it off, Ginger and Val did pretty well dancing in the first two weeks as well. According to Week 3 spoilers, Ginger will be dancing the Contemporary to“Home” by Phillip Phillips.

Nyle DiMarco is a fan favorite this year, and won’t be going home any time soon. Despite his disability, he and his partner Peta continue to wow the Dancing With The Stars judges and fans at home. For week 3 of the competition on ABC, we can expect to see Nyle and Peta dance the Tango to “Verge” by Owl City, Aloe Blacc.

Witney Carson is super cute, and she seems to be compensating for Von Miller’s goofy awkwardness. Right now they are in the middle of the pack. They won’t be going home too soon – but Von and Witney are definitely going to have to step it up if they plan on going to the finals. For ‘Most Memorable Year’ Von and Witney will be dancing Contemporary to “In the Air Tonight” by Phil Collins.

Poor Marla Maples – she really has been dancing her heart out on Season 22. But, the show isn’t entirely based on the judges’ scores, it doesn’t matter how amazing you are on the dance floor if America isn’t voting for you. And, the fact that her ex-husband is the very controversial Donald Trump probably isn’t helping her garner votes. But, lucky for her – there are a lot of dancers worse than her that will need to be voted off first. For Week 3, Marla and Tony are performing the Jive to “Happy” by Pharrell Williams.

Antonio Brown is one smooth dude, unfortunately the Rumba is not his forte and his lackluster performance last week landed him and Sharna on the bottom three of the scoreboard. Although his scores technically based him in the bottom three, he will probably get enough votes to keep himself around. DWTS spoilers tease that for Week 3 Antonio and Sharna will be dancing the Foxtrot to “7 Years” by Lukas Graham.

Former NFL player Doug Flutie definitely stepped his game up for Week 2 – but he doesn’t seem to have a whole lot of voters out there. Plus, his Week 1 performance cast a pretty big shadow on fans’ perceptions of him – no matter what he does in the future. Let’s see if in Week 3 Doug can keep improving when he and Karina take on the Waltz to “Rainbow Connection” by Kermit the Frog.

Former Real Housewife Kim Fields gets an “E” for effort – but her effort isn’t going to get her much farther in Season 22. In Week 2 her salsa with Sasha was a bit awkward – and she froze on stage for a moment. Dancing With The Stars 2016 spoilers tease that for Week 3 Kim will perform the “Facts of Life” TV Theme Song by Gloria Loring. Maybe since Kim is reliving her glory days, she will be a bit more comfortable, and let loose on stage.

Seriously, what is Mischa Barton even doing on Dancing With The Stars? The fact that the girl can’t dance aside – she is miserable. There is no way her storming off and not interviewing after her performance last week is going to score her too many votes. What a poor sport! For Week 3, Mischa and Artem will be fumbling through the Samba to “Party in the USA” by Miley Cyrus – and that will probably be the last we will see of her (hopefully).

So DWTS fans, are you excited for Week 3? Is there any chance Mischa Barton won’t be voted off? Let us know who you think is going home in the poll below and stay with CDL for all your DWTS news, dances, and recaps!