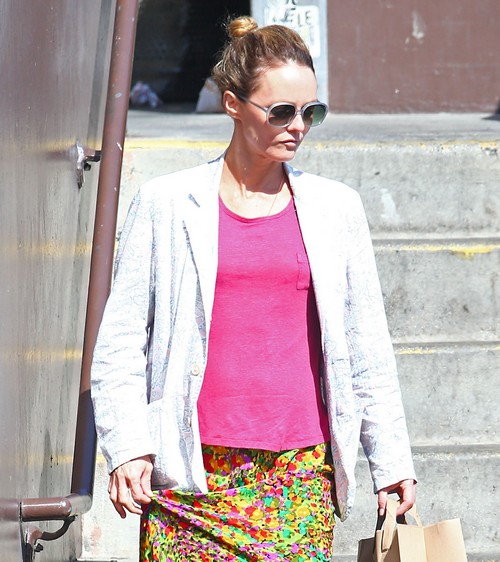 Vanessa Paradis was spotted in Los Angeles for the first time since Johnny Depp and Amber Heard’s divorce case was settled in court. The French actress looked radiant in a pink top, white blazer and print skirt as she ran a few errands as there’s new speculation on whether or not she’s willing to take back Johnny Depp after his Amber Heard divorce.

Vanessa Paradis and Johnny Depp’s wedding never happened. Even though the ex-couple were together for 14 years, the actor dumped her for the much younger Amber Heard. Vanessa Paradis was left with nothing but the couple’s two children, Lily-Rose Depp and Jack Depp as Johnny Depp paraded his Amber Heard romance all over the world, from red carpet premieres to film festivals in Cannes and Venice.

While Vanessa Paradis and Johnny Depp were together, the Hollywood actor still maintained his heartthrob looks and charismatic personality. Clearly, Johnny Depp wasn’t as happy with Amber Heard as he was with Vanessa Paradis and it was only when he married Amber did his life turn for the worst. The Hollywood actor looked worse for wear, as he looked more disheveled and more overweight and bloated each time he stepped out in public.

Of course, getting back with Vanessa Paradis would be a good thing for Johnny Depp, but the French actress knows better than to go back to a man that dumped her for a younger woman. For Vanessa Paradis, her only concern is her children Lily-Rose Depp and Jack Depp and knowing how much their father Johnny Depp means to them, she knows she needs to keep things civil with her ex-partner, no matter how hard it may be at times.

Sure, Vanessa Paradis might have defended him against Amber Heard’s abuse allegations, but that’s only because she has her own interests to protect. The love between Vanessa Paradis and Johnny Depp is long gone, whether both of them like it or not.

Take a look at our photo gallery of Vanessa Paradis below and tell us, do you think she should take back Johnny Depp?

Vanessa Paradis was spotted out and about in Los Angeles, California on September 6, 2016. Her daughter LIly Rose Depp is set to follow in her foot steps as she will be starring in the new Chanel campaign. FameFlynet

Lily-Rose Depp lined up at the counter “The Coffee Bean” at LAX airport in Los Angeles, California. She was eating a snack with a drink quickly before catching an airplane accompanied by her bodyguard on May 22, 2016

16 year old actress Lily-Rose Depp, the daughter of Johnny Depp & Vanessa Paradis, is spotted out and about in Paris, France with her rumored boyfriend 24 year old model Ash Stymest on March 22, 2016. Lily and her beau enjoyed lunch at Le Progres with Lily’s aunt, Alysson Paradis. And while a relationship hasn’t been confirmed, rumors of a romance between Lily and Ash have been circulating since October!