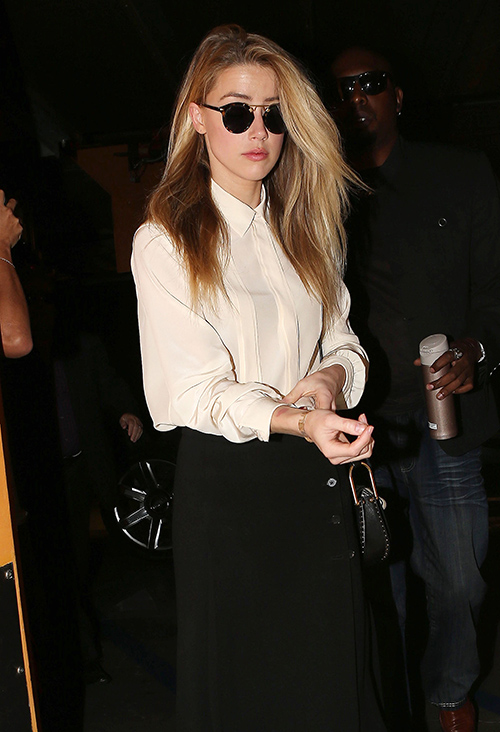 Johnny Depp and Amber Heard’s divorce has been anything but amicable and it looks like things are about to get even worse for the ex-couple. There’s new speculation that Amber Heard is outraged that Johnny Depp and Vanessa Paradis might be getting back together again.

Johnny Depp left his long-term partner Vanessa Paradis several years ago for up-and-coming and much younger actress, Amber Heard. Even though Johnny Depp and Vanessa Paradis have two children together, they never got married, yet the actor quickly tied the knot after a whirlwind romance with his new girlfriend. But now that Amber Heard has filed for divorce, and worse, claiming that he was physically and verbally abusive to her during their 15-month marriage, it looks like Johnny Depp is looking to get back with the mother of his two children and the only woman who has ever remained loyal and faithful to him.

According to Britain’s Grazia Magazine, Johnny Depp’s family members are apparently rooting for the ‘Pirates of the Caribbean’ actor to rekindle his relationship with Vanessa Paradis for the sake of their two children, Lily-Rose, 17, and Jack, 14. One source said, “Johnny and Vanessa are best friends, even now. Vanessa has been there for him throughout this entire thing. After everything that’s happened she will always stand by him.”

She apparently cried and refused to testify against her ex-husband, which of course could easily mean that Amber Heard might be hiding the real truth about their tumultuous marriage. What’s more, it looks like she’s completely livid over the fact that Johnny Depp is moving on while she’s still struggling to come to terms with their divorce, even though she’s the one who pulled the plug on their marriage.

Vanessa Paradis on the other hand know that rumors of her and Johnny Depp getting back together again will only spark even more anger and jealousy in Amber Heard and after seeing her partner dump her for a much younger woman, it’s the best kind of revenge Vanessa Paradis can get.

Tell us CDL readers, what do you think? Should Johnny Depp and Vanessa Paradis get back together again? Is Amber Heard’s meltdown happening right before our very own eyes? Drop us a line with your thoughts in our comments section below.