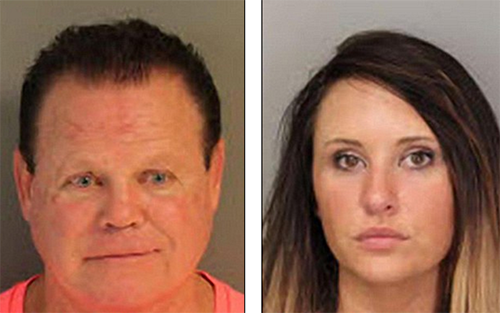 Wrestler Jerry ‘the King’ Lawler and his 27-year-old fiancée, Lauryn McBride, have both been arrested for domestic assault on Thursday. The problem? Police aren’t certain who initiated the fight. Ironically, the incident occurred after Lawler, 66, returned to the couple’s Memphis home after attending a WWE event titled A Night In The Slammer. The two got in an argument and told police the other was responsible for instigating the fight.

McBride says that Lawler slammed her head down onto their kitchen counter before heading upstairs to retrieve an unloaded handgun. He told her she should kill herself as he put the gun on the kitchen table.

Really, Lawler? That’s not a very nice way to treat the woman you’re planning to marry. Hearing Lawler tell it, that’s not how everything went down. He said their argument started after McBride came home drunk after attending a basketball game. Things became violent when she wanted to leave their home, which they’ve shared for five years. Lawler wouldn’t allow her to drive drunk.

He then alleges she scratched and kicked him before tossing a candle at him. Well, if that’s true, we think your actions are quite commendable; but like in many domestic violence cases, it’s difficult to know whose story is fact and who’s is fabrication.

The New York Daily News reported McBride then went to the garage and grabbed the handgun, which she threw across the table at Lawler. Lawler also stated” “She, (McBride), was threatening to kill herself.” He then claimed she was the one to make the call to the police.”

Jerry Lawler joined the WWE in 1992. He is a one-time American Wrestling Association World Heavyweight Champion and a three-time World Class Championship Wrestling World Heavyweight champion. As a result of this arrest, he has been suspended from the WWE in accordance with its zero tolerance policy on domestic violence.

Regardless of who’s responsible, it’s totally not cool for wrestlers to become violent outside the ring. Body slam your opponents; don’t strike out at someone weaker, younger, and more vulnerable than you. We have to applaud the WWE for taking the correct action with this one. Even if Lawler’s story is true, he will serve as a good example to any other wrestler who might get any ideas of using physical force to make a point.