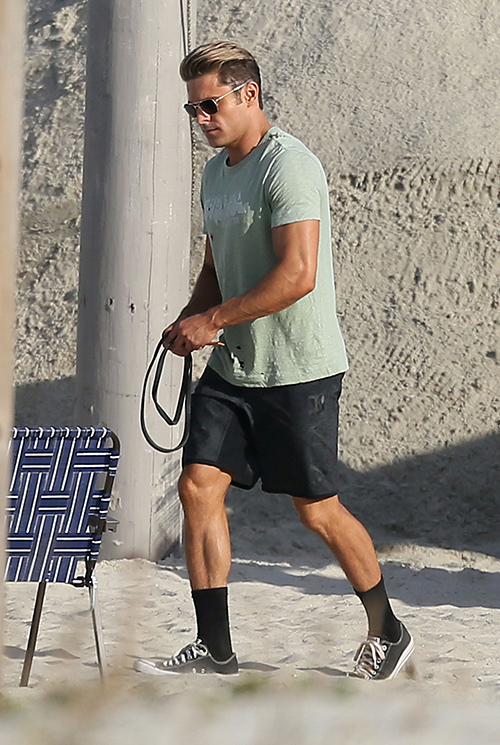 Zac Efron and Sami Miro’s break-up still has a lot of us scratching our heads. Seriously, what reason could two of the best-looking people to ever grace our planet (according to the internet) have to break up? It became evident that Zac Efron and girlfriend Sami Miro were having “issues” when he began deleting photos of her off from his social media – which took quite a while, seeing as how he had chronicled their relationship for nearly two years. Then, earlier this week, People Magazine confirmed the news – Sami and Zac had definitely split.

And it looks like we may have found the cause behind the couple’s mysterious break-up. His name is DJ Alex Andre. He’s a musician, his brother is Chris Chronicles, he has long hair, a brooding face, and looks nothing like Zac Efron. Less than 48 hours after Sami and Zac’s break-up was official, Miro was spotted on a date in West Hollywood with Alex Andre at Sushi Roku.

We don’t know DJ Alex Andre, but we are assuming that the guy has a ton of game – he should probably get some sort of medal for being able to steal Zac Efron’s girl. So far, Zac Efron has remained silent on the break-up and hasn’t addressed Sami Miro’s new man. Efron is currently in Georgia (on opposite ends of the country as his ex), filming the Baywatch remake, and posing shirtless for the paparazzi approximately three times a day, it seems.

Maybe we are giving DJ Alex Andre a little too much credit. Zac Efron has been filming back to back movies for what seems like forever. Is he ever not working on a movie? Maybe the simple fact that he was there, and Zac Efron was always off on set somewhere, was enough to win over Sami Miro.

What do you guys think? How does one go from Zac Efron to DJ Alex Andre? Do you think Sami was cheating on Zac all along? Share your thoughts in the comments below!