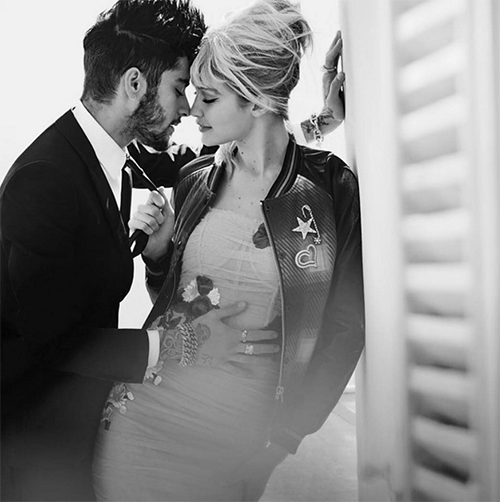 Zayn Malik and girlfriend Gigi Hadid are reportedly on the verge of a break-up after a nasty cheating scandal. Gigi Hadid is all about keeping up appearances – so she has been out and about and taking care of her modeling duties as if nothing is wrong. However, according to a new report, Gigi Hadid is a hot mess behind closed doors and is convinced that former One Direction beau Zayn Malik is cheating on her with his ex-girlfriend Perrie Edwards.

According to an all new report from Life & Style Magazine, Gigi Hadid caught Zayn texting Perrie Edwards – and all hell broke loose. An inside source dished to the magazine, “They were lying in bed together when Gigi noticed that Perrie had texted Zayn. And Gigi saw on his phone that they’d been in contact. Gigi couldn’t believe Zayn would do that. She’s second-guessing the relationship.”

Anyone who has followed Gigi Hadid’s love life over the years can tell you that it doesn’t take much to have the model “second guessing” a relationship. This is the same girl who breaks up with one guy, and then emerges the next day with a new boyfriend. Joe Jonas and Cody Simpson are walking proof of that. Hadid has left a trail of broken hearts behind her – and it will only be a matter of time before we can add Zayn Malik’s name to that list.

Of course, Gigi Hadid could be over-reacting; Zayn and Perrie were together for a very long time. Maybe they still have some of each other’s stuff, or joint accounts, or shared cell phone bills to work out. Or maybe Perrie Edwards just wants her man back – and Gigi Hadid should be even more concerned than she is.

What do you guys think? Is Zayn Malik cheating on Gigi Hadid with Perrie Edwards? Is there a break-up in their near future? Share your thoughts in the comments below!