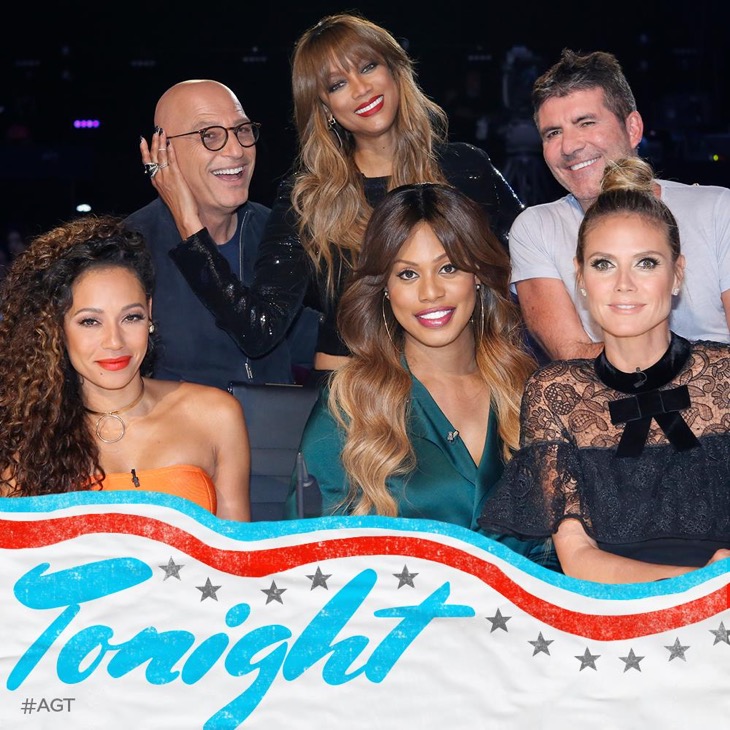 Tonight on NBC America’s Got Talent begins its new season with an all-new Tuesday, August 1, 2017, episode and we have your America’s Got Talent recap below!  On tonight’s AGT season 12 episode 9 as per the NBC synopsis, “The Judge Cuts continue with guest judge Laverne Cox joining the panel.”

The show starts with Tyra, Howie, Simon, Mel and Heidi entering the studio. The special guest judge for the night is Laverne Cox, the star of Orange Is the New Black. Laverne will be able to use the golden buzzer to send one act straight to the live show in Las Vegas. Oscar Hernandez is the first contestant of the night. He is a dancer and his parents did not encourage him to dance growing up because they were afraid he would be teased. He has spent most of his life choreographing other people’s dance routines and tonight it his chance to shine. The audience loves his act and Laverne encourages him to keep pursuing his dreams. Howie and Heidi loved his energy. Simon loved his originality and hard work.

Tony versus Jordan is a little bit magic and a little bit technology. The judges enjoyed their performance. The Naked Magicians are next to take the stage and the judges tell them they deserve to go on to the live show. The next magician is Jewki Yoo and he really wants to impress Simon since Simon did not like his act the last time he performed. He does several card tricks and the judges loved his magic and his humor. It will be tough since there were several good magic acts tonight but even Simon was impressed by Jewki.

Herbie Ross is a 54 year old saxophone player and singer who has dreamt of making it in music for years. His performance is amazing and the judges and audience are blown away. Mike Yung is a subway singer who sings A Change Is Gonna Come. Simon thinks Mike has paid his dues and his time has come. Laverne thinks his voice really shows his life experience and talent. It is going to be a very hard decision for the judges to pick between these two amazing voices.

5 Alive is a singing and dancing group of 5 guys that Simon really does not like. Mel enjoyed their performance but there are only 7 spots so their fate is unknown. Final Draft is a singing group of 4 guys from New Jersey who had Simon’s support during the first round. Howie and Simon both enjoyed them more during their first performance, not so much this time. Brobots and Mandroidz are a hip-hop dance group from Torrance, CA. They hope to move on to Las Vegas to prove to their parents that dance is a real career option. The judges loved their dance.

Marisa McKaye is a 12 year old singer and wows the judges with her beautiful voice. She cries happy tears after her performance. Celine is nine years old and will sing, How I Am Supposed to Live without You. She gets a standing ovation from the audience. The crowd just loves her. Laverne loves her also and hits the golden buzzer. Celine is in tears to realize she will move on to the live show. There are now only six spots left. Aileen is a school administrator by day and a pole dancer by night. The judges and audience aren’t sure what to make of her act. Simon doesn’t think she brought it up a notch from her first performance.

Jay Jay is next to perform and is a strange mix of rock star and geek. Howie loved it and Simon feels like he shouldn’t like him but he does. Heidi just isn’t sure that Jay Jay is good a solo act and doesn’t support him moving on to the live show. Diavolo is a dance company based in Los Angeles, CA. They are led by a crazy Frenchman. They do an amazing dance that also uses props, a fog machine and acrobatics. Heidi loved it as did Laverne but she is unsure of what the marketplace is for the act.

Jonathon Rinny does a balancing act that is incredibly dangerous and keeps the judges on the edge of their seats. Bello Nock is a dare devil who will be shot out of a cannon over a helicopter. Simon gave him a NO in his initial performance at first but changed his vote to a YES when Bello told him he would do the cannon trick in the second round. Bello is nervous because this is such a dangerous stunt. He is successfully shot out of the cannon and the audience loves it. The judges were truly fearfully for his life. All of the judges say they will support him moving to the next round.

Several comedians are next to perform. Daniel Ferguson does voice impressions as he sings. He act includes Marg Simpson and Howie. He was very entertaining. Preacher Lawson is up next and has been doing stand-up for the last eight years. He hopes tonight will be his big break. Everyone loved him. Tyra tells him killed it and Mel says her face hurt from laughing so much. Howie thinks they have a star on their hands. All the judges promise him he will make it to the live show. The brother and sister roller skating duo of Billy and Emily England are the next to perform. They complete amazing stunts on roller skates and the audience does crazy for their act, even Simon was blown away.

5 Alive and Final Draft return to the stage and Mel tells them that neither of the acts will be moving forward. Brobots & Mandroidz and Oscar Hernandez are told that both will be returning for the live show. None of the magicians move on, Tony versus Jordan, The Naked Magicians, and Jewki Yoo are sent home. Diavolo also moves on to the live show in Las Vegas. Heidi is heartbroken to tell Marisa McKaye she will be sent home. Jonathon Rinny, Billy & Emily England and Bello Nock return to the stage to hear that the roller skating England duo will go on to the live show. Jay Jay and Aileen are sent home. Herbie Ross and Mike Yung are up next and Herbie is sent home. Preacher Lawson and Daniel Ferguson are the final two acts. Preacher moves on Las Vegas.