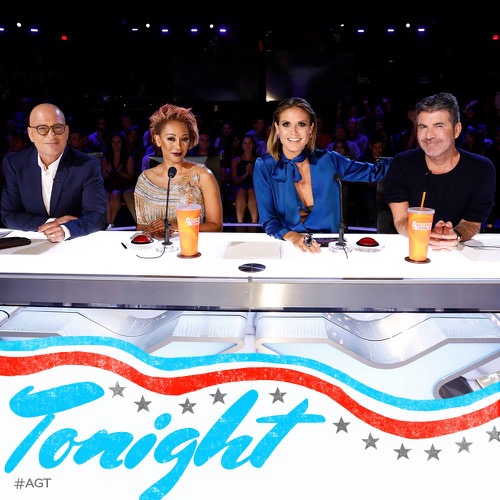 Tonight on NBC America’s Got Talent begins its new season with an all-new Tuesday, August 29, 2017, episode and we have your America’s Got Talent recap below!  On tonight’s AGT season 12 episode 17 as per the NBC synopsis, “Twelve acts take the stage at the Dolby Theatre in Hollywood.”

The show opens with a recap of last week’s winner’s performances. Tyra then takes the stage to welcome the audience to the Dolby Theater and to introduce the judges. Simon, Mel, Heidi and Howie are ready to go. Twelve acts will perform tonight but only 7 will move on tonight. Tonight is the last night for acts to earn the opportunity to move on to the live finals. The first act to take the stage is Danell Davis and Greater Worker. They are a gospel group formed by members from all around the country. Both the crowd and judges are on their feet by the end of the performance. Mel thought their performance was electrifying. Heidi loved their performance and song choice. Howie says he has never been to church before but he thinks this is exactly what it would be like. Simon thinks the performance was inspirational and the group’s best do far.

Tyra welcomes the viewers back from the commercial break and encourages them to visit the Red Cross website to help the victims of the Hurricane. The brother and sister act of dancers Junior and Emily Alabi are next to take the stage. Before they perform they talk about their difficult life growing up. Both Mel and Heidi are on their feet by the end of their performance. Mel is just overwhelmed by the level of talent on the show tonight. Heidi and Simon both thought the act was dynamic, powerful and very entertaining. Simon encourages viewers to vote for this act because they deserve to move on to the finals. Howie wishes them the best of luck. Tyra encourages everyone at home to vote.

The next act to take the stage is Final Draft. Simon and judges changed their mind about this act and called them back after initially eliminating them from the completion. Heidi tells the home audience to put the bag of chips down and vote for this group if they want to see them move forward. Howie thought the act was kind of boring but said it is up to America to decide. Mel loved their harmonies. Tyra again lists the ways to vote for your favorite act.

Thirteen year old Angelina Green was Heidi’s Golden Buzzer choice and she is thrilled to be on the show tonight. Angelina made Heidi very proud with her performance but could tell she was nervous. Simon says that regardless of her age she has an amazing voice. Mel thinks her music really speaks to people. Angelina tells Tyra that singing tonight was a dream come true for her and she still can’t believe it happened.

The amazing Colin Cloud is the next act to take the stage. He says he doesn’t perform tricks but rather he has skills that other people just don’t have. He uses his observation skills in his performance. Simon joins Colin on stage and he asks Mel to pick someone from the audience to join them on stage as well. Colin gives a piece a paper to the woman from the audience and asks her to read it to herself. Colin then points to a woman in the audience and is able to tell her what she was just thinking. Mel then comes on stage and stands behind Simon. Colin has Mel attempt to stab Simon but the knife was plastic. Colin does several tricks but all the judges find his performance a little confusing. Mel points out to America that he does have incredible skills and thinks he should move on.

Tyra introduces subway singer Mike Young as the next act. He has been singing for over 30 years on the subway for tips to pay his bills. He sings Love Right Where We Are. Heidi and Simon both think his performance was great and hope to see him move on. Howie says age doesn’t matter and that he was the best act of the night. Mel loves his voice but gets angry when Simon interrupts her as she speaks. She encourages America to vote.

Oscar & Gasper take the stage and perform their unique light show with a male and female performer. Simon thought the performance was brilliant but Heidi thought it was a little slow. Howie and Mel disagree. Tyra encourages the home viewers to vote if they want to see Oscar and Gasper move on in the competition.

Simon’s favorite “Sara and Hero” are the next act to take the stage. Sara has been through a lot and hopes tonight takes her one step closer to having an act in Las Vegas. Howie and Mel loved the show and it made them both smile. Heidi thinks the act was better tonight then in previous performances and asks America to vote to keep them on the show.

Three performers remain tonight. As the show returns from commercial break Tyra again asks America to donate to the Red Cross to help victims of the hurricane. Chace Goehring was DJ Khalid’s Golden Buzzer choice and tonight he sings his original song “Rare Illusions”. This was not Heidi’s favorite song but she loved his voice. Howie hopes Chace can get the votes he needs because he wants to see him return.

The next act is Diavolo. It is a crazy dance troupe whose performers use props and dangerous moves. The crowd loved the show and Heidi was blown away. Simon fell in love with this act. It is memorable and unique. Howie loved the originality and begs the audience to vote to keep them. Mel also was amazed by the incredible moves.

Kechi is a singer who survived a horrible plan crash as a teenager. Her voice is beautiful and the entire studio audience gives her a standing ovation at the end of her performance. She is in tears. Mel thinks she has an amazing voice but is also a survivor and an inspiration to others. Simon has so much respect for Kechi and Howie thinks she is a beacon of beauty.