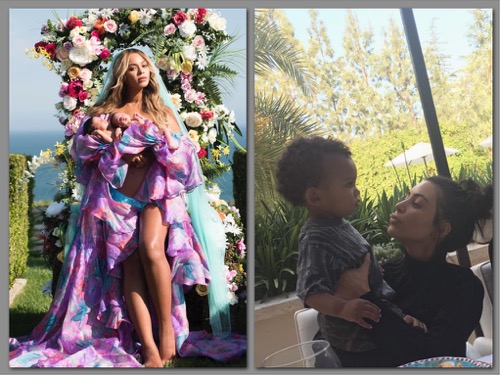 When celebrities have babies, part of the fun is waiting for the first pics. Before the images are revealed on social media or in some pricey mag spread, their names are divulged…to either the horror or admiration of fans who either love or hate what the parents have chosen.

Most celebrities like Kim Kardashian West and Kanye West or Jay-Z and Beyoncé don’t select standard everyday names. Or ones that those who aren’t celebrities would consider being traditional. No. They need to give their offspring completely off-the-wall, absurd and ridiculous first names that no one would dare give their children. Some silly celebrity monikers include Apple, Blanket, and Prince Michael just to name a few.

Everyone couldn’t wait for Kim Kardashian West and Kanye West to reveal the name of their second child, a baby boy they decided to call Saint West. Beyoncé and Jay-Z’s new twins gave celeb watchers the same feeling of anticipation while they waited. Rumi Carter, the name given to the baby girl, is lovely, but Sir Carter, the name for their boy? Quite unremarkable and bland.

Obviously Sir Carter and Saint West have significance to their parents. Sir Carter and Saint West, unlike most children with horrible first names, won’t be bullied like kids saddled with unfortunate names. They’ll have their parents money and their luxurious lifestyle and security guards to protect them from the vicious verbal arrows of ridicule. More though, these names speak of the sheer self-importance and arrogance of Kim Kardashian West and Kanye West and Beyoncé and Jay-Z.

These couples specifically chose to give their children names they’ll be forever known for as a god or a title. And honestly, it’s tough to decide which is worse.

Saint West and sir Carter will grow up with the belief that because of their names, they’re more superior and important than other children. They will take this entitlement to adulthood. And at least with Kim Kardashian West and Kanye West, it’s understandable why they’d name their son Saint West. His mother and father never shy away from the spotlight. If anything, they exploit themselves and their family as often as possible.

As for why Beyoncé and Jay-Z named their son Sir Carter, it’s perhaps so that he’ll always be respected in society? He’s already loved and admired for who his parents are. Why would they give him such a simple name? You decide. Which name is more ridiculous, saint West or Sir Carter? Tell us in the comments why you believe one is worse than the other.