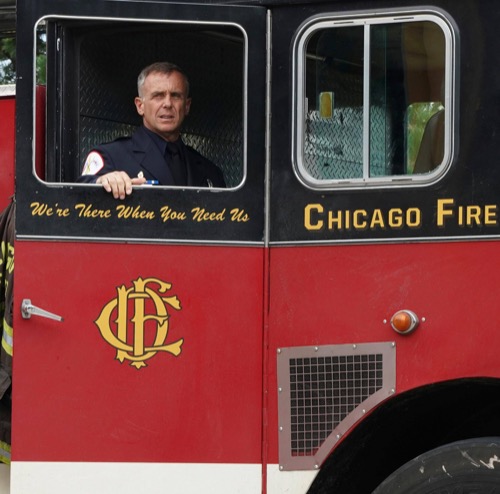 Tonight on NBC Chicago Fire returns with an all new Thursday, October 19, 2017, season 6 episode 4 called, “A Breaking Point” and we have your Chicago Fire weekly recap below. On tonight’s Chicago Fire episode as per the NBC synopsis, “While running a secret errand, Dawson finds herself trapped in a collapsed parking structure. In other events, pressure mounts on Casey as he takes on additional duties; Kidd grows skeptical of Hope; and the firehouse receives a surprise visitor.”

Tonight’s Chicago Fire season 6 episode 4 looks like it is going to be great and you won’t want to miss it.   While you’re waiting for our recap make sure to check out all our Chicago Fire recaps, news, spoilers & more, right here!

The show opens with Gabby picking up a gift for her husband. Hope shows up at work and is confronted about stealing for her old boss. She denies it and offers to quit but Leslie tells her no. As Gabby is heading back to her car she notices construction on a parking structure is causing the building to become unstable. She runs in to warn people to get out and the structure collapses. She isn’t injured but several other people are. She works to stabilize as many as she can. Taylor teases Matthew about his promotion. Gabby and a soldier also trapped try to communicate with the outside world to let them know they are alive but need help.

The chief delegates personnel issues to Matthew. He is less than thrilled. Gabby discovers more people trapped in the ruble. One woman is not hurt but is acting very aggressively. There is also a bank teller who is not injured but is having a panic attack. Gabby works to calm him. Gabby and the soldier work to get a man out of his car. The soldier tells the rest of the people trapped that they need to dig their way out. Gabby tells them no too because it could make the pillars fall but he won’t listen to her. Matthew is presented with a Guinea pig by a Boy Scout troop. They think it would make a great mascot for the firehouse. Gabby realizes there are several people stuck in the elevator. She is able to pry the door open and get the people out. The soldier finally agrees with Gabby and they stop trying to dig out.

Matthew is presented with a Guinea pig by a Boy Scout troop. They think it would make a great mascot for the firehouse. Gabby realizes there are several people stuck in the elevator. She is able to pry the door open and get the people out. The soldier finally agrees with Gabby and they stop trying to dig out. Instead, they work to re-enforce one of the pillars that are starting to fall. Matthew starts to wonder why he hasn’t heard from Gabby. The firehouse watches the rescue efforts on the television. They still don’t know that Gabby is trapped inside.

One of the men trapped passes out and Gabby realizes there is a carbon monoxide leak. A car is still running that was crushed. The soldier decides to go into the ruble to try to turn the car off. The team finally realizes that Gabby is trapped and head to the building. They start helping with the debris removal. One of the trapped men is able to get a telephone working and Gabby calls Matthew. He tells her to get everyone to the north wall. She sends everyone that way but goes the other way trying to find the soldier who went to turn off the car.

The team continues to move ruble and think they have a way into the building. They find all of the survivors from Gabby’s group but Gabby isn’t there. Matthew heads into the building to try to find Gabby. He finds her and the injured soldier. They all crawl to safety. Matthew and Gabby embrace. When the team returns to the firehouse they discover the Guinea pig as escaped. Matthew is officially promoted to Captain.