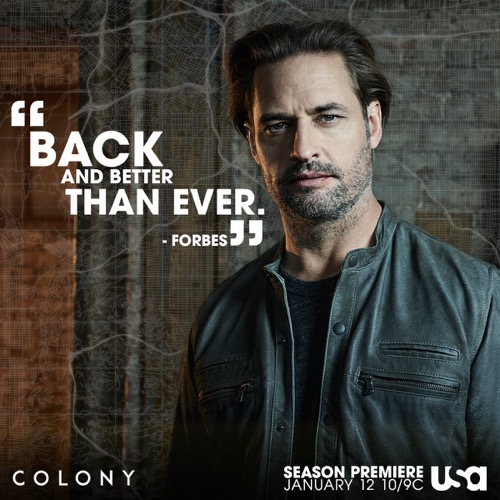 Tonight on USA Network their futuristic drama Colony airs with an all-new season 2 premiere and we have your Colony recap below.  On tonight’s Colony season 2 episode 1 premiere as per the USA Network synopsis, “The Season 2 premiere finds Will (Josh Holloway) and Katie (Sarah Wayne Callies) struggling to keep the family together; Broussard (Tory Kittles) returning home and Snyder receiving a job offer from a mysterious organization.”

So make sure to bookmark this spot and come back between 10PM – 11PM ET for our Colony recap.  While you wait for our recap make sure to check out all our television spoilers, news, photos, videos, recaps & more, right here!

Will has a reason to be concerned. He has worked with Devon and he genuinely likes working with her however he no longer believes he can trust herself on tonight’s season premiere of the “Colony” because suspects that she’s dirty. Will has noticed that Devon had suddenly come into money and he didn’t want to risk his family by continuing to work with her if she had gotten that money illegally on the side. But things hadn’t gone well when Will had told his partner that he was going to be asking for a transfer. Devon had taken the transfer to mean that Will couldn’t stand to be around her and so in turn made her resent him.

Devon had gotten upset because she had thought Will would have more faith in her than that. However, she had tried to tell him that she had gotten the money from her generous uncle for a down payment on her new home and so she wasn’t sure why he just wouldn’t believe yet the two had still needed to work together and their unit had been thrown into chaos because of their latest operation. The bureau had been assigned to look for some missing people and no one had really been told their importance. So neither Devon nor Will had known who they were truly looking until they had come across a missing engineer.

Yet, the engineer had been targeted. He had apparently had to hide in his panic room when he saw a group of armed men invade his house and kill his housekeeper. So Will and Devon had wanted to know why a simple engineer had built a panic room in his house and they had been told that he needed to take precautions because he was on the list. The engineer along with about a thousand others were on a list that said in the event of national catastrophe – whether it be a nuclear war or a terrorist attack – these people were to be sequestered because they were charged with recreating the world if the worst were to happen.

So the missing people that the bureau had been assigned to find had held a major significance to the world at large, but Alan Snyder had eventually found out that was he was that list as well. Alan had been at the office preparing for another dreary day at work when out of nowhere he had been visited by men in suits and they had taken him to see the Hosts. Though Alan had been told that he could only take one person with him to save in case of disaster and he had chosen his daughter. And she hadn’t wanted to leave her mother behind so he had ordered that she be taken by force from the house because he couldn’t risk losing her. Even if she might hate him one day.

Alan had had to do what was best for his daughter because he had been forewarned that something was happening and it hadn’t taken too long for both Devon and Will to figure that out as well. But Devon had been the one to tell Will that it was ok if he wanted to be with his family. So Will had been on his way to them when he had seen cars lose power and cell service break down entirely however his wife Katie and their daughter Gracie had been struggling to collect the other two members of their family. Katie had gotten their son Bram in the end from school and she would have wanted to get their son Charlie as well though the car wasn’t working and Charlie was two miles out. And so Katie had been forced to make a decision.

Katie had had to choose between getting two out of three children to safety or risk them by trying to collect her son Charlie. So Katie had chosen safety. She had taken Bram and Gracie back home where they would wait for her sister and husband. However, Will had nothing good to say. He told his wife that he believes that they were going through an EMP attack which shut down all the power and that it must be the beginning of something much worse yet Will had taken the bike they had in the backyard to try and reach Charlie. And therefore he had been a witnessed to the invasion and there nothing he could do to get to his son.

The Hosts had attacked in numbers that overwhelmed a city that no longer had the power to fight. So Will had seen all of this happening and had known that the city as well as the country had lost the war without ever having fought a single battle. Yet, all around him there had been panic, death, and grief. People had lost loved ones in the invasion and that included Katie’s sister Maddie. Maddie’s husband Rob had been on a plane when the power went out and that meant the plane had been forced out of the sky. And so she knew that Rob’s plane had probably crashed over some unknown location.

Though Will had never given up on his search. He had continued to look for Charlie long after the Hosts sent up their own puppet government and the world had gone to hell because he had still wanted to keep his family together despite everything. So Will had thrown himself into one dangerous situation after another until he eventually went to Devon. Will had needed Devon’s help to investigate his son’s disappearance and hadn’t cared what happened to his pride, but his wife Katie had been visiting their eldest Bram in detainment. Katie’s sister had pulled some string for her in order to get a visitation and unfortunately that was all Katie could get. Her son wasn’t going to be freed and she had no idea what would happen to him in custody.