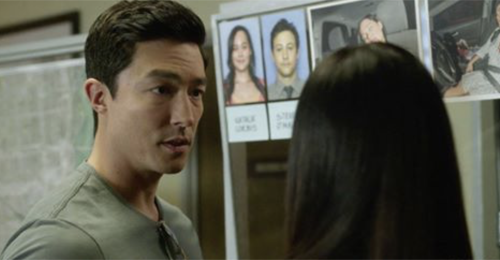 Tonight on CBS their hit drama Criminal Minds returns with an all-new Wednesday, November 22, 2017, episode, called “Neon Terror,” and we have your weekly Criminal Minds recap below. On tonight’s Criminal Minds episode season 13 episode 8 as per the CBS synopsis, “When an UnSub in Miami sensationalizes his crimes by giving the local media exclusive footage, the BAU is called in to investigate.”

Rossi sat down for a televised interview on tonight’s all-new episode because he was promoting another book.

Rossi had written a book about Tommy Yates. Yates had been a prolific serial killer and had murdered hundreds over a period of twenty years. However, Yates had eventually gotten caught and his life sentence, as well as prison life in general, had constricted him. So he had found another way to exact pain. He had come to an agreement with Rossi in which he would give Rossi the location of where he buried his victims and another woman would be identified through this was done to hurt Rossi because Yates would make Rossi visit him every year on his birthday to get that location. And so this latest book had been personal to Rossi.

Rossi had written about tracking Yates and the similarities there was between a serial killer and a profiler. Though in the middle of the interview, the newscaster had been forced to wrap up the interview to notify the public of a murder. The latest victim had been killed while she was in her car and she had been shot in the heart with the same .44 like two other victims. So Miami was quickly coming to the realization that they had a serial killer on their hands and Rossi had been asked for his opinion on the matter, but he couldn’t talk to the media without clearing whatever he might have to say with Miami PD and with his team

The team had been notified about the Unsub and had later joined Rossi in Miami. But the team soon learned they were dealing with a very aggressive media that was reporting valuable pieces of information. Like how the victims had had butterfly clips in their hair. So that could have been something they normally were worn or it could have been something planted on them by the Unsub because the hair clips were meaningful to him yet the information stops being valuable when everyone learns about it and so some of them went to go talk to Channel 3. Channel 3 was a low-level news channel and the station had been hoping to make a name for themselves.

Yet, Channel 3 had been warned about posting information that was so sensitive. They could be playing right into the Unsub’s hands and so the team had kindly asked them to back down however the woman that ran the station, Sandra, had objected to being told what to do. She said they were following their journalistic integrity to report the news and so she had continued to push her team to gain traction. They had come up with the name for Unsub because they wanted bragging rights for naming him the Neon Killer. So it wasn’t surprising when the Unsub began a spree just to get everyone’s attention.

The team had been thinking about it and they believed the Unsub likes watching the buzz he created and initially they thought he could be a first responder yet they later thought he could be in the media and so they paid attention to anyone showing exclusive footage. However, that led them back to Channel 3 because there had been a specific member of the station that had gotten all the great leads. So the team questioned Kal Montgomery about how to he always proved to be in the right place at the right time and they had also questioned him about his ex-girlfriend. The ex-girlfriend had looked like all the victims and so Kal had looked like a great suspect.

Kal had been angry at someone that looked like all the victims and therefore the victims could have been surrogates. Yet, Kal had seen where the BAU was going with his questions and had confessed that he never took the footage. He said he would get anonymous texts from someone that claimed they were just trying to help and so Kal had never questioned any of the things he had been given because he thought he was getting them from a police officer at the scene. So it wasn’t until he talked about it with the team that he realized he had been chatting with the Unsub. The Unsub had wanted to drive up the excitement and that’s why he took footage and photos.

The Unsub was the one that had taken pictures of the clip he had put in the victims’ hair and he had later sent the station another video that was a tad different than the others. The new video had shown the actual killing and it had ended with the clip revealing that there had been a child in the backseat. But seeing the child had been Sandra’s breaking point. She hadn’t known what happened to the little girl in the footage and had feared the little girl had been killed as well. So she hadn’t wanted to run with the footage because she had found a moral compass in the end that told her that it hadn’t been right and so the news had been dead until the little girl had been found.

The little girl had been left in the backseat of the car and she had been alright. Though the woman that had been killed in front of her had been a cousin that was babysitting for the night and had stopped by a strip mall to answer a text. So that team wondered how the Unsub knew the victim was going to pull over and the only answer they could come up with had been that the Unsub must have followed the victim for a specific purpose however they hadn’t known what that purpose was. The little girl had been fine and she had just wanted to go home with her mom and dad. And so it didn’t click for JJ until she saw the little girl having to go through cameras to get home.

That’s when JJ remembered this wall of stories that Sandra had up in her office because the wall detailed every big headline Sandra had ever written and there had been one story about a little boy that survived a carjacking. His name was Jeffrey Whitfield and he had been heading to the vet with his babysitter when a man killed his babysitter right in front of him before fleeing the scene. However, there had only been one person that had gotten an interview with the little boy and it had been Sandra. Sandra had captured the story in great detail and the Unsub must have gotten high from all the attention. So he went on a spree to relive that moment.

Jeffrey had probably grown up believing that moment in his life was the only time he stood out and so his parents died last year must have been a trigger for him because besides himself there was only Sandra that remembered it. The rest of the world had moved on and had forgotten all about it. Though when Jeffrey saw that Sandra hadn’t run with the latest story about the little girl, that had upset him. He thought Sandra had betrayed him and hadn’t wanted to be as important as she used to be. So he went down to the news station and he killed anyone that got in his way because he wanted to force Sandra into becoming part of the story.

Jeffrey had held Sandra hostage and he made sure their encounter was getting aired because he wanted everyone to remember him. He made Sandra repeat what happened to him and how he hadn’t talked for a year after the incident, but then he saw himself on tv and the whole experience had seemed like a game to him. So the news coverage was what got him to talk again. He talked about his babysitter that happened to look like all his other victims and how he had started killing people because everyone forgot him. And so he was going to kill Sandra to ensure he would never be forgotten again when the team burst in.

They had Garcia cut the feed in the studio because they knew he wouldn’t kill Sandra if he was off the air. Yet, they had had to promise Jeffrey the chance of a live interview behind bars to get him to drop his gun and hand over Sandra. So Jeffrey was still going to go after the headlines and he had woken up a monster in Sandra. She later said that it had been exhilarating when she became Jeffrey’s hostage and so she asked Rossi to thank Jeffrey for her because now all the cameras were on her for her big moment…