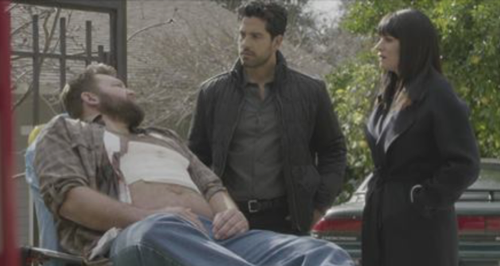 Tonight on CBS their hit drama Criminal Minds returns with an all-new Wednesday, March 22, 2017, episode called “In the Dark,” and we have your weekly Criminal Minds recap below. On tonight’s Criminal Minds episode season 12 episode 17 as per the CBS synopsis, “The BAU believes two unsubs may be operating at the same time, when victims killed in two drastically different ways are discovered in the same city. Meanwhile, the team grapples with keeping Reid safe in prison.”

Garcia had been found crying. She had apparently gone to see Reid in prison and had found out that he had gotten beaten up however Reid hadn’t wanted her to report the incident to the Warden. He said that would just make it worse and that can be true in these sorts of cases. But Garcia had wanted to do something and promising him that they were going to get him out of there didn’t seem to be believable anymore. So Garcia had told Alvez about her visit and he had told her that he could check with some contacts about getting Reid additional protection.

However, Alvez had need that some personal time to get handle everything. So he had asked Prentiss if he could stay back while the rest of the team investigated the latest case and she hadn’t had a problem with it seeing as it had been about Reid yet Prentiss had also tried to see what she could do. She had reached out to her old friend Fiona who was acting as Reid’s lawyer and she had tried to see if they could speed up the protective order. And, unfortunately, Fiona didn’t have anything encouraging to say.

Fiona told Prentiss that the wheels of justice can spin very slowly and that went especially for people already in the system. So Fiona didn’t know how much she could in the beginning, but Prentiss had put her faith in Alvez and he hadn’t let them down. Alvez as it turns out had asked to see Calvin Shaw and he had told Calvin that he was making him personally responsible for what happened to Reid because he knew the truth. Alvez knew that Calvin hadn’t killed his CI out of some misplaced form of justice.

Elena might have threatened to reveal other undercover agents yet she had been killed because of her affair with Calvin. Calvin had been sleeping with her as she was going through fertility treatment and so it wasn’t that surprising that he killed her right around the time his wife must have told him that she was pregnant. So Alvez said if Reid wasn’t safe that he would ruin Calvin’s life and deprive him of the one thing he couldn’t live without. Like his son who has been told that his father was some kind of anti-hero.

So that was just scary enough to work and Alvez had felt comfortable about meeting up with the team afterwards. Yet, things in Vermont had been difficult because the team had initially believed that there were two Unsubs in the small town called Burlington. There was one Unsub that was hunting during the day and mostly killing hunters though there was another Unsub that was killing at night during mostly home invasions. And so the team hadn’t realized there was just the one Unsub until they figured out his condition.

The Unsub was apparently sleepwalking/killing. He would kill during the day when he had control and then he would lose that control when he fell asleep. So that’s why his night killings were always so chaotic, but the Unsub was later able to wake up at night because his intended victim had tried shooting at him. Though finding out that he had been killing people that he deemed were innocent was only going to make him even more erratic and so the team did become worried about what he could do if he tried to stay awake.

They had profiled him as someone that was filled with rage and was killing hunters because he believed they seemingly deserved it for hunting others. But finding out that he had been killing in an uncontrolled manner was something they believed would break their Unsub. So they tried to find him before he could kill again and they decided to use his night killings to see if that could tell them anything. Lewis had said that people that sleep walk didn’t bump into anything because they relied on their recollection. And so they compared the locations with people that sleepwalk.

So they got Trey Gordon. Trey had been raised by an abusive father who was a hunter much like the men he killed while he was awake and the houses where he killed when he was asleep had all had a connection to his father. Though the fact he hadn’t targeted the place where he had been molested had meant that could probably be his next stop and so the FBI raced a cabin that was now owned by Jannis Weir. And as they were calling her to warn her, Trey had showed up at her door and had tried to kill her.

The fact he couldn’t was because Prentiss had stayed on the line and had advised Janis to lock herself in the bathroom until they get there. However, all it had taken to later wake up Trey had been to shoot at him and then it was like he became a different person. Trey had been so regretful about what he almost did that he had asked the BAU if they could help because he didn’t want to stay like he was. So they had told him that he was going to get the help he needed, but prison wasn’t the best place for that as they saw for themselves with Reid.

Reid had gotten protection from Shaw. But the gang that was after him had wanted to teach him a lesson and so they had killed his friend as a warning. They said that people will get hurt if Reid ever tried to mess with another one of their shipments. So Reid’s nightmare was far from over!