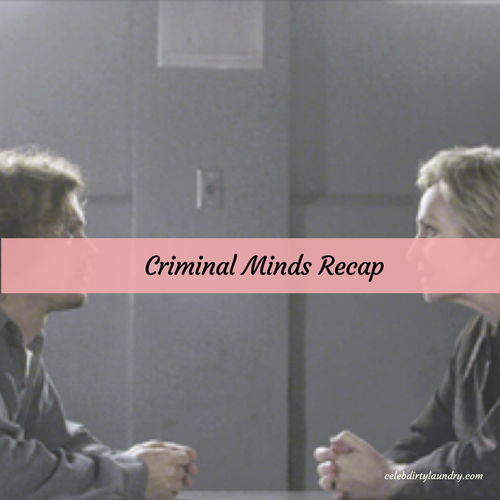 Tonight on CBS their hit drama Criminal Minds returns with an all-new Wednesday, April 26, 2017, episode, called “Unforgettable,” and we have your weekly Criminal Minds recap below. On tonight’s Criminal Minds episode season 12 episode 20 as per the CBS synopsis, “Government employees are succumbing to the same symptoms of a heart attack; Reid anxiously awaits his trial date.”

The team talks about Spencer’s memory coming back. He remembers that a woman was at the murder scene. A woman is the killer who is framing him. At first they aren’t sure but then think Scratch must be working with a partner. They decide to check the data base of DID patients in the morning. Stephen gets home late to dinner and tells his wife this job is rough but he is determined to catch Scratch. They begin to kiss and the phone rings. Stephen gets called to the ER because Sam has been admitted. Stephen remembers a happy memory he shared with Sam as he drives to the ER. Sam is awake and says the doctors think he had a heart. Stephen isn’t so sure. He wonders if it is related to his work.

Sam mentions feeling a pinch on his back before he got sick. Stephen checks his back and realizes he has been dosed with radiation. A Hazmat team is called in and confirms. Sam is put into isolation. The team meets and discusses the Sam situation. They discuss his counter-intelligence work and the Russians history of using poison to kill their enemies. Sam dreams of a case he and Stephen worked on in Russia and utters the word Suchi. Stephen wonders if it has something to do with his illness. He calls the team with this information.

David and Emily interview Suchi but he denies knowing anything. Elle meet with Spencer to tell him his case has been continued for six weeks. The team hopes to use this time to find the woman he remembered. With Suchi being a dead in the team has no other leads regarding who poisoned Sam. They begin to wonder if Sam was just a random victim and as they check other hospitals they find two more victims with the same symptoms. Just then a man in a hoodie stabs another man in the back on the street. There may be a serial killer on the loose.

All of the victim work for the federal government and the first two die of multiple organ failure. All worked for different agencies. Another victim is found and the team starts the profile. It could be a bitter ex-federal employee or a person who wants to profit by selling the antidote. Sam and Stephen talk and Sam asks him to promise to catch the person who did this to him.

Spencer’s mom comes for a visit and another man is poisoned. Spencer’s mom is confused and agitated. The team reviews the newest victim and his wasn’t stab in the back. He was fed the poison. He must have known the victim. The team searches his house and finds several lead lined boxes. His wife is their prime suspect. She is a nurse and has been stealing radiation from several hospitals over the years. She had a multi-million dollar insurance policy on her husband. This has all been a scheme to killer her husband to get the money.

The team finds her but she takes a hostage and holds a syringe to her neck. David is forced to shot and kill her. Stephen is happy to tell Sam the news. Sam is dying and wants to see his son. Spencer and his mom talk and she thinks his situation is all her fault. Sam and his son share the final moments of his life. Spencer’s mother’s care taker comes to pick her up and he realizes she is the woman who was at the murder scene.