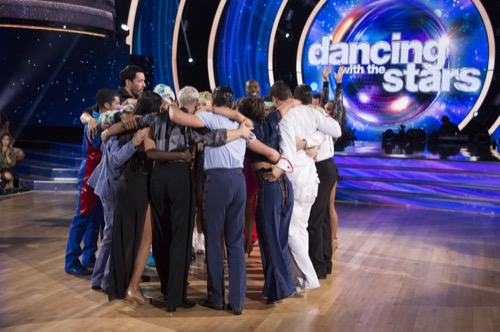 Tonight on ABC the glitz and the glimmer returns to the ballroom as another new episode of Dancing With The Stars season 25 airs! We have your all-new Tuesday, October 9, 2017, season 25 Week 4 “Most Memorable Year” DWTS  and we have your Dancing With The Stars recap below! On tonight’s DWTS Season 25 episode 4 as per the ABC synopsis, “An elimination occurs after the fourth week of competition, which feature songs representing memorable years in the celebrities’ lives.”

Frankie has done acting, car racing and been part of a band but he looks back at it as if it wasn’t him; he doesn’t remember it, he has had 9 concussions and a fair amount of mini-strokes (TIAs). He admits to never talking to a doctor about it. His most memorable year is 2017, he learned to live in the present and even if he doesn’t remember things, he is happy!

Len: When it was light it was fluffy, like my mom’s Yorkshire pudding. Lots of quickstep content which I appreciate, thoroughly enjoyed it and a great opening to tonight’s show and well done.

Bruno: You two really know how to put on the glitz and the glamor. You really acted like a racer determined to get across the finish line. Keep going!

Carrie Anne: There is no better moment, than the present, to express your joy. What’s most alluring about your dancing is how contagious your joy is in every movement. Your dance is clean and neat and you are back in the ballroom!!

2012 was a heavy year, the year his grandmother passed away, and everything he did throughout his career was for her. Tom talks to Terrell, as he is in tears, saying he misses her and if it weren’t for her, he wouldn’t be here.

Bruno: This was your most accomplished performance to date. Elegant. Smart. Great Posture. I am so surprised it was wonderful.

Carrie Anne: Your grandmother is right – you keep showing up and you have struggled through this process. I saw poise and elegance; a new reverence to the dance and it elevated everything you did. Well done.

Len: Congratulations, it was a very well-crafted routine, there was an ease and elegance about it and the emotion of the dance came out. You came out and did great.

2016, the year Nikki made her comeback to the WWE ring. Brie Bella and John Cena talk about possible paralysis and how scary it was. Brie says her sister really is FEARLESS, and she proved it by returning to the ring 7 months after life changing surgery.

Carrie Anne: Working with silks – that was the perfect blend of a newfound artistry. I saw all your inner dialogue and I feel like this is the first time we were able to see that. It was beautiful and powerful.

Len: I liked it and it was very creative, it showed your dance and athletic skills. You did great things with the silk, it was strong, powerful, dynamic and great!

Bruno: You were so powerful out there and very sexy. It was done with heart, a contemporary interpretation of the Kama Sutra.

2011, the year Nick married Vanessa Lachey. He says they have been together 6 years and have a long way to go; saying “Stick with me kid”.

Len: It was touching. I loved that it was creative. You’re a big guy who danced with sensitivity and that should be commended.

Bruno: I love it because you showed your intensity. Light on your feet and energy was much better; watch your balance.

Carrie Anne: Beautifully choreographed, exactly for you and your body moves. That was by far your best dance ever! Before the scores, an emotional Vanessa joins them and hugs them both.

In 2016 she found out her dad had cancer, it was the hardest year of her life with him passing away in January 2017.

Bruno: Gorgeous and magical, it felt like a beautiful dream you never want to wake up from. You have a quality that you were dancing with your dad, it was moving and inspiring.

Carrie Anne: Beautifully executed, you are so unique. I want to thank you because its moments like this that I thank God that I get to do this. That was a incredible tribute.

Len: I liked it, it had a floaty feel to it but I would have liked to see more Viennese Waltz to it. Mark, it was great, I loved it. Well done!

Derek Fisher and Sharna Burgess – Jazz – “Move On Up” by Curtis Mayfield.

2007 was the year his 10-month-old daughter, Tatum was diagnosed with a rare form of eye cancer. The surgery worked and she is a miracle; he chose to walk away from basketball and dedicate all his time and love to his little girl.

Carrie Anne: It’s an emotional night. Thank you for being an outstanding human being and leader. Unfortunately, you were out of sync a little bit, which was distracting. I loved the emotion.

Len: Great rhythm and style. Uplifting and for me, your best dance.

Bruno: you have flower power, and an uplifting treat and I loved it.

2005 was the year he was officially adopted; this week is the dedication to his grandparents who adopted him, although they were always mom and dad to him.

Len: I was at the Rams game and you sang the national anthem, and I thought you sang it fantastic and your dance tonight was also fantastic.

Bruno: That was exquisitely flawless. You dance with such open-hearted sincerity and honesty. A work of art.

Carrie Anne: I wasn’t crying because of your story, I was crying because it was such pure gratitude and love; bringing it to another level. Thank you!

2016 was her final year with Pretty Little Liars and she was struggling with her health, gaining weight and not knowing why, forcing her to lose out on jobs; on the bright side her fiancé, Hudson was there for her, giving her hope and a new chapter in her life. This dance represents the light at the end of the tunnel.

Bruno: A Proper foxtrot, you have a natural grace that suits the ballroom dance; you have it, have confidence.

Carrie Anne: I love the transition and loved the storytelling.

Len: I loved the quantity of foxtrot and I liked the quality of the dancing, it was lovely. Well done!

In 2017, she was 29 weeks pregnant and her water broke. This song got them through some really tough times. Phoenix Robert Lachey made their family whole and complete.

Carrie Anne: Rumba is the woman’s dance; it was an excellent dance for you, you lost your balance but lent itself to the storytelling. That was so touching, but I saw the wobble.

Len: Maks, you know what makes the old judge happy. I loved the routine and I loved the way you performed it.

Bruno: It was romantic and classy, you have lovely lines and shape. You danced it beautifully and I really liked it.

2007 changed his life, his true goal was to be an actor. He put all the real estate behind and moved, but it didn’t pay off, the failure nearly crushed him. He then attempted to combine acting and real estate.

Len: I don’t think anything is going to stop you now Drew, you are on a roll and that was twice as much fun, twice the energy and definitely your best dance.

Bruno: I thought I was hallucinating (Jonathan joined them). You kept it together. It was a full-on jive with a “feel good” factor.

Carrie Anne: I loved it but you need to fix the weird movement your hands are doing. It’s not major but you were pronging it.

Victoria Arlen and Val Chmerkovskiy – Foxtrot – “I Lived” by OneRepublic

Victoria doesn’t really have a year that is memorable as she reveals the story of becoming a “vegetable” and her determination to prove every doctor wrong!

Bruno: My darling! What you have been through and achieved is beyond belief. You are an inspiration to me and everyone. You emerged as a star and danced like one too.

Carrie Anne: I love that we get to be a part of your story. I feel honored. The chemistry between you is so tender. Well done!

Len: You have overcome the struggles and the pain and to come here…. You are so inspirational. That was just a joyful, lovely experience. Well done!