Days of Our Lives Spoilers: Abigail and Chabby Wed But Paulson Faces a Legal Issue – Forbidden To Marry 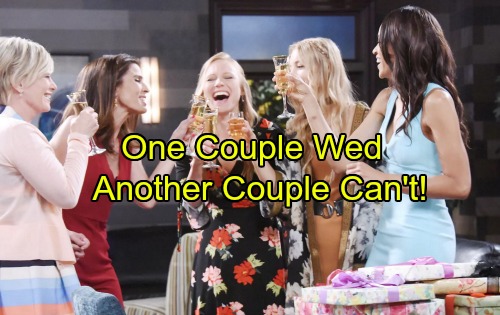 Days of Our Lives (DOOL) spoilers for the week of October 2 reveal that only one couple will tie the knot. Also, Justin Kiriakis (Wally Kurth) will notify “Paulson” that they face a legal issue. Does this have to do with Will Horton (Chandler Massey) and will it prevent a marriage from taking place?

“Chabby” and “Paulson” are both getting ready to walk down the aisle. However, things are going to take a shocking turn when Ben Weston (Robert Scott Wilson) shows up. He will make a crazy announcement, but it might have some merit.

There is a high probability that Ben’s announcement is that Will is really alive. In fact, Chandler Massey revealed that the murder scene with Will was reshot. Instead of seeing flashbacks with Guy Wilson, expect to see Massey in those shots.

Days of Our Lives spoilers tease that shortly after, only one couple will tie the knot. That will be Chad DiMera (Billy Flynn) and his blushing bride, Abby (Marci Miller.) However, where does this leave Paul Narita (Christopher Sean) and Sonny Kiriakis (Freddie Smith?)

It appears that Justin will give the couple a warning. They are going to face a legal issue and what else could it be but Will Horton? If he is actually alive, that means Paul and Sonny won’t be able to legally get married.

Days of Our Lives spoilers also reveal that later, Paul will receive some disappointing news. Despite the devastating circumstances, he stands by the man he loves. He will come up with an idea so Sonny can get answers. It all sounds like it is leading up to a big reveal.

It is known that Marlena Evans (Deidre Hall) will somehow get involved. It will be difficult for her to deal with Ben. After all, this is the man that supposedly killed her grandson. However, she is a skilled psychiatrist and could use a truth serum to get the facts.

It was also reported that there will be clues leading to a Memphis mystery. It sounds like that is where all this is heading. Especially after Lucas Horton (Bryan Dattilo) and Sami Brady (Alison Sweeney) discover the stunning news about their dead son. Only time will tell if those clues lead the Salemites to Will being alive and well.