Days of Our Lives Spoilers: Chad and Gabi’s Tension Explodes Towards Breakup – Abigail Scrambles to Save Chad 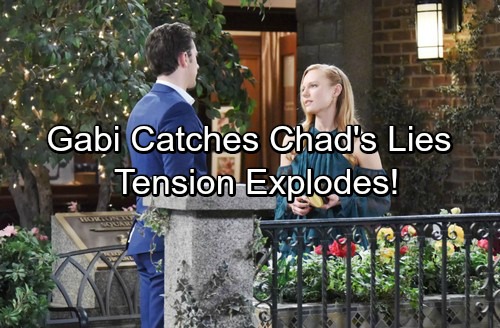 Days of Our Lives (DOOL) spoilers tease that more issues are brewing in Chad (Billy Flynn) and Gabi’s (Camila Banus) relationship. As Chad and Abigail’s (Marci Miller) feelings for each other surge, Gabi will sense that something’s up. She’ll feel like Chad is slowly pulling away from her and she’s exactly right.

Gabi should’ve known this would happen when she agreed to be with Chad. It was obvious that he still loved Abigail. Gabi would’ve been better off sticking with Eli (Lamon Archey), but that option is fading fast. It’s clear that a spark is developing between Eli and Lani (Sal Stowers).

As for Chad and Gabi, the tension will reach a boiling point next week. After Chad tells a few fibs about Abigail, Gabi’s rage will erupt. Days spoilers state that Chad and Gabi will have an explosive argument. By the time this fight ends, they could be on the verge of a breakup.

After Dario is arrested, it looks like he’ll push Abigail to clean up his mess. Days of Our Lives fans will see Abigail and Theo (Kyler Pettis) scramble to keep Chad out of trouble. When Theo’s laptop falls into the wrong hands, Andre (Thaao Penghlis) will team up with Abigail to get it back. They’ll be desperate to put a stop to all this.

Perhaps Dario wants Abigail to destroy any evidence of his shady activities. He might force her to do it if she wants Chad to keep his freedom. Whatever the case, it seems the charges against Dario will eventually be dropped.

Naturally, Chad will find out about the blackmail scheme sooner or later. Days of Our Lives spoilers reveal that Chad will demand answers as Abigail acts increasingly suspicious. Dario won’t appreciate it when Chad sticks his nose where it doesn’t belong. He’ll once again remind Chad that Abigail made her choice.

Days spoilers say a major showdown is coming the week of July 24-28. Chad, Abigail and Dario will all be involved in this crazy confrontation. DOOL viewers won’t want to miss this epic faceoff. We’ll give you updates as other news emerge. Stay tuned to the NBC soap and don’t forget to check CDL often for the latest Days of Our Lives spoilers, updates and news.